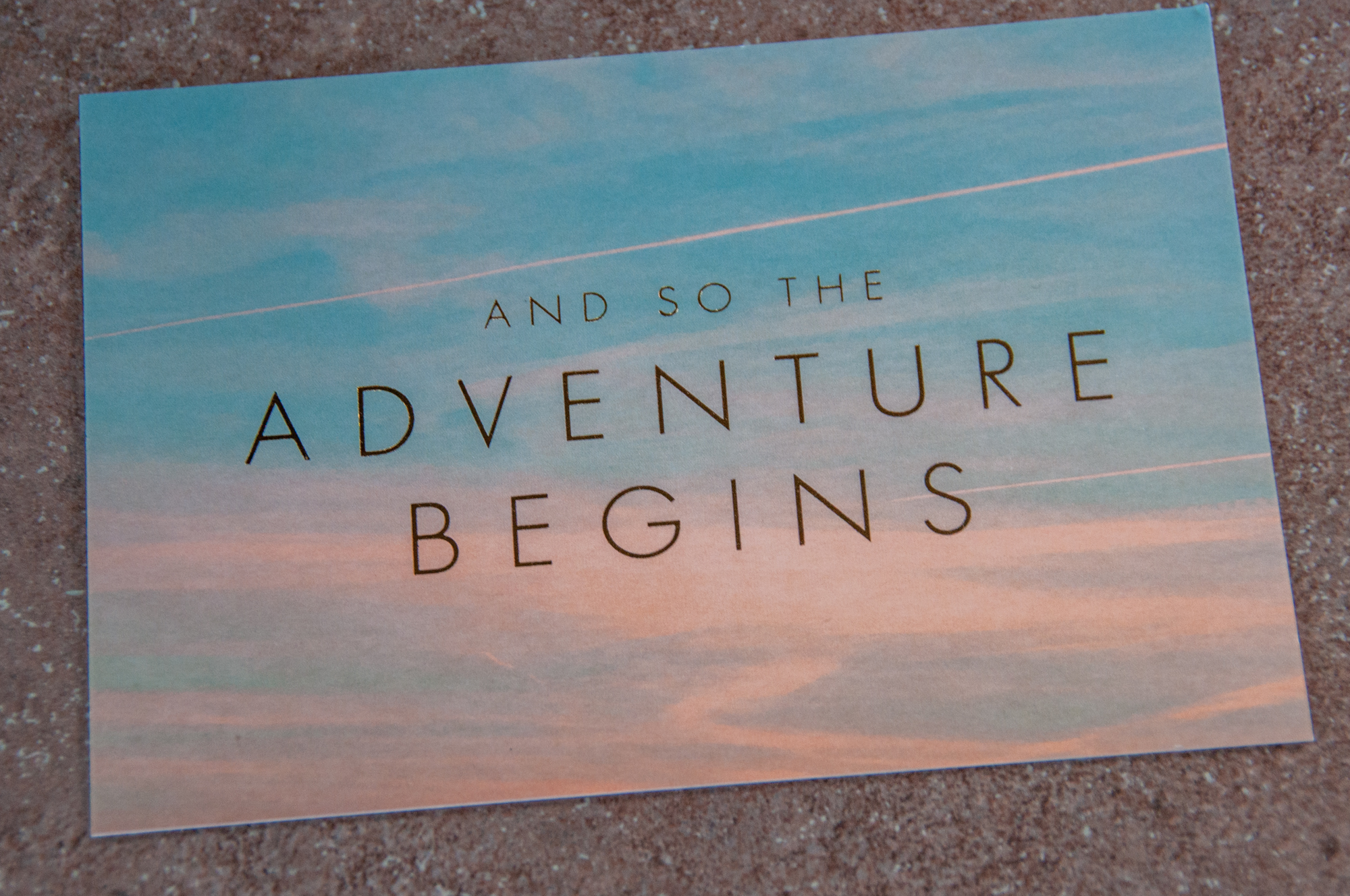 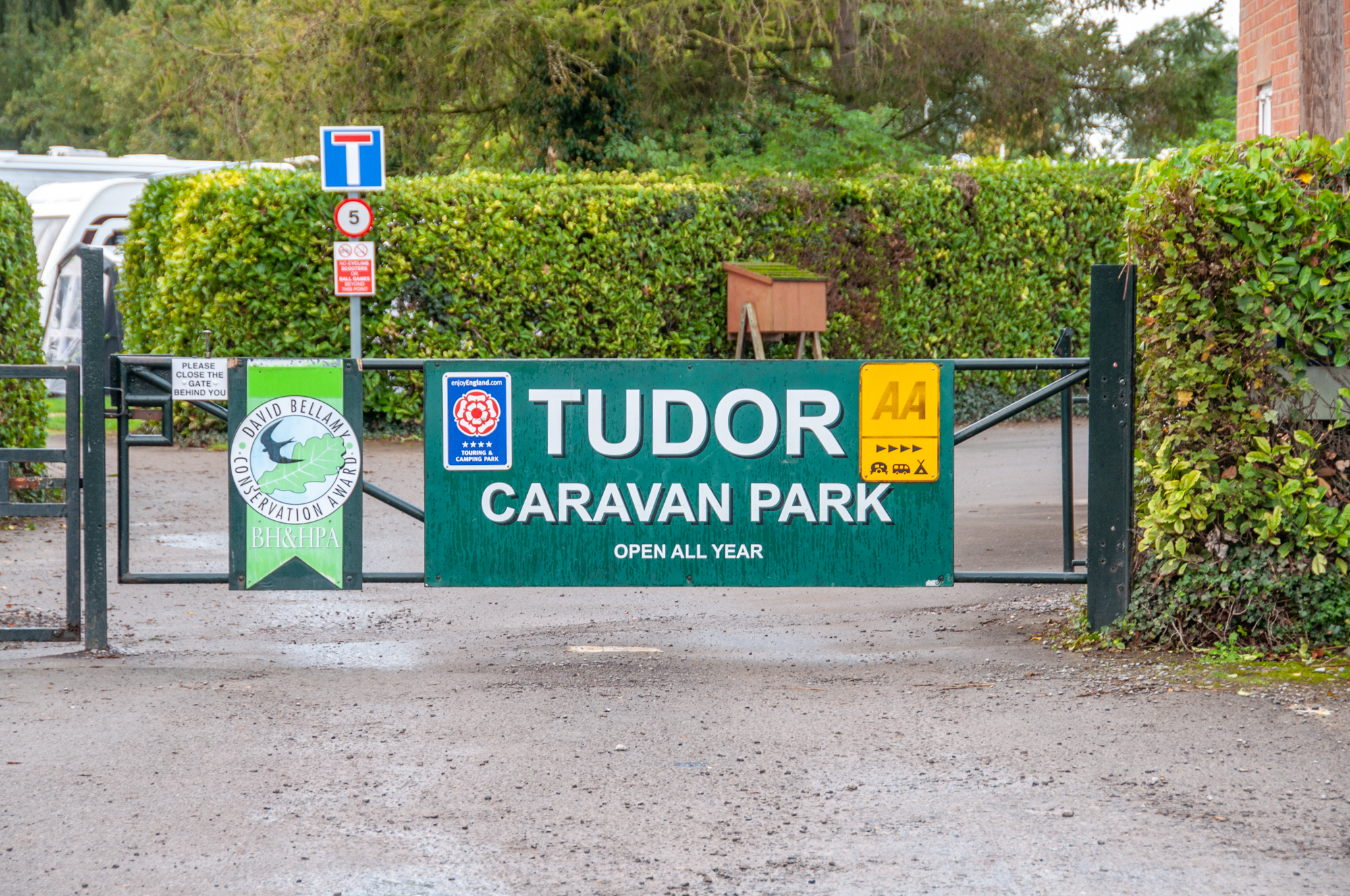 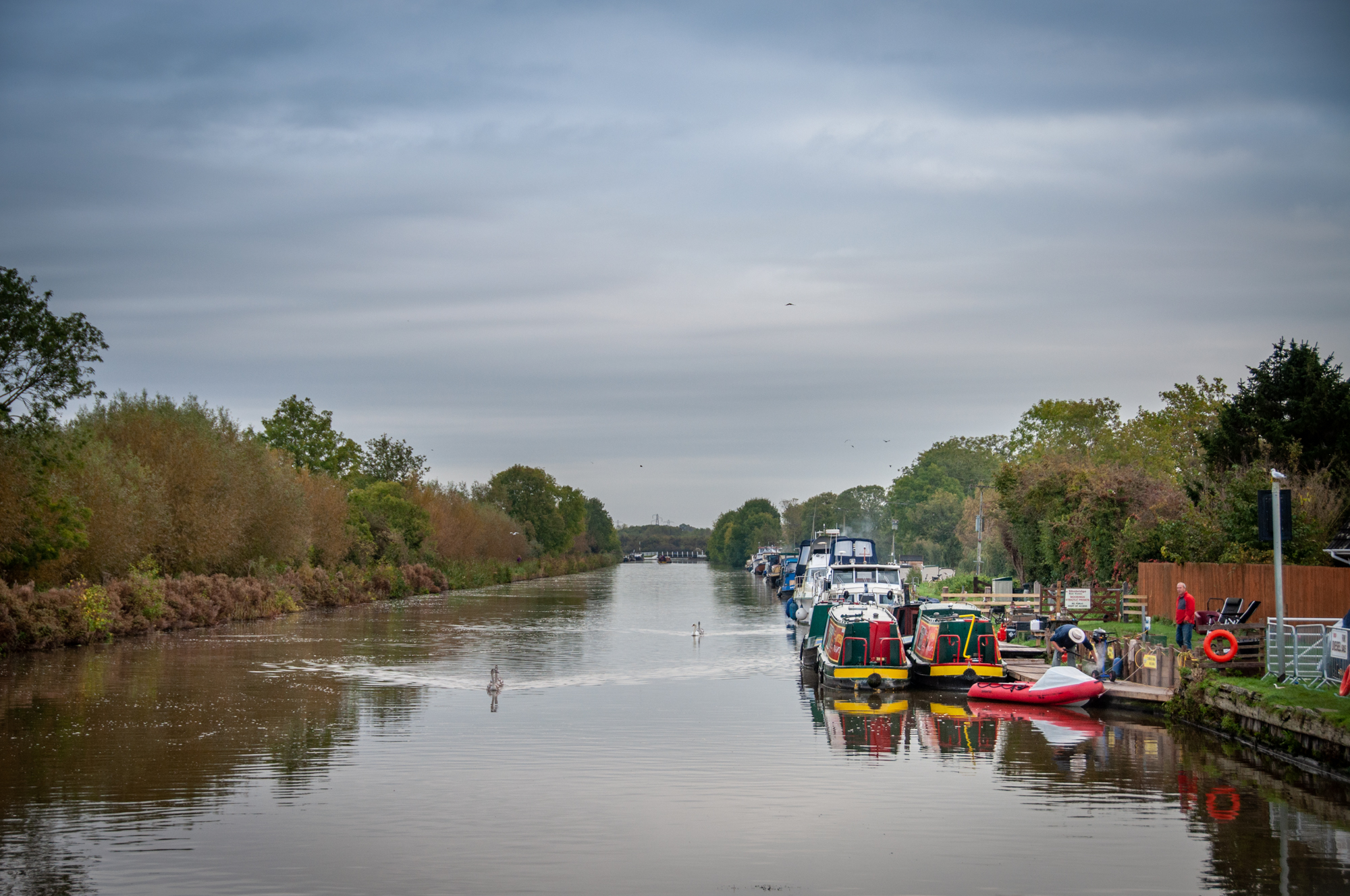 Slimbridge – Maiden Voyage in the Autocruise

Sara was quite tired after her intensive day of perfume-making (which was my birthday present to her) so when I collected her at 5 o’clock in the evening on Saturday, she just sat back while I drove to Slimbridge for our very first outing in the van that we had collected from the dealer just a few days earlier.

We arrived after 6pm and the office was closed but, very helpfully, a note had been left for us a board outside. The note explained that the office had closed but that we should drive round to pitch M11 and then pop into the office after 9am the next day. Attached to the note was a little map of the site and some basic instructions. All good so far.

We drove round, and the pitch was close to the toilet block. The toilets and showers were all clean and warm. Another big tick. As novice campervanners (or are we motorhomers? Not sure.. so I’ll say campervanners from now on) we managed to successfully connect up the electric cable (exactly as Shaun had explained during the handover – see latest news entry here for more details on the handover). It worked – hurrah. Then we turned on the heating. It actually seems quite luxurious to have heating in a van – and, of course, it makes Autumnal camping possible. (I know Sara would not even contemplate camping in the cold – as she had been put off by a chilly boat on the Broads earlier in the year).

Once the van started warming up, we decided to wander round the site. It didn’t take long. Then we saw a pub. Luckily the pub allowed dogs, so we got a table, some nice food and I had a couple of pints of the local IPA. Sara was flagging by then, so we went back to our (now very toasty) van. We had a few more drinks and then (even though it was only about 9pm) went to bed.

We had left the heating on – and as time went on the van got hotter and hotter. Our new 13.5 tog quilt was rather more heat-efficient than necessary while the heater was belting out more heat. The controls for the heating are under the bed so I reached under and tried to turn it down. Judging by the increased noise from the heater and the increased heat, I had turned it the wrong way.. 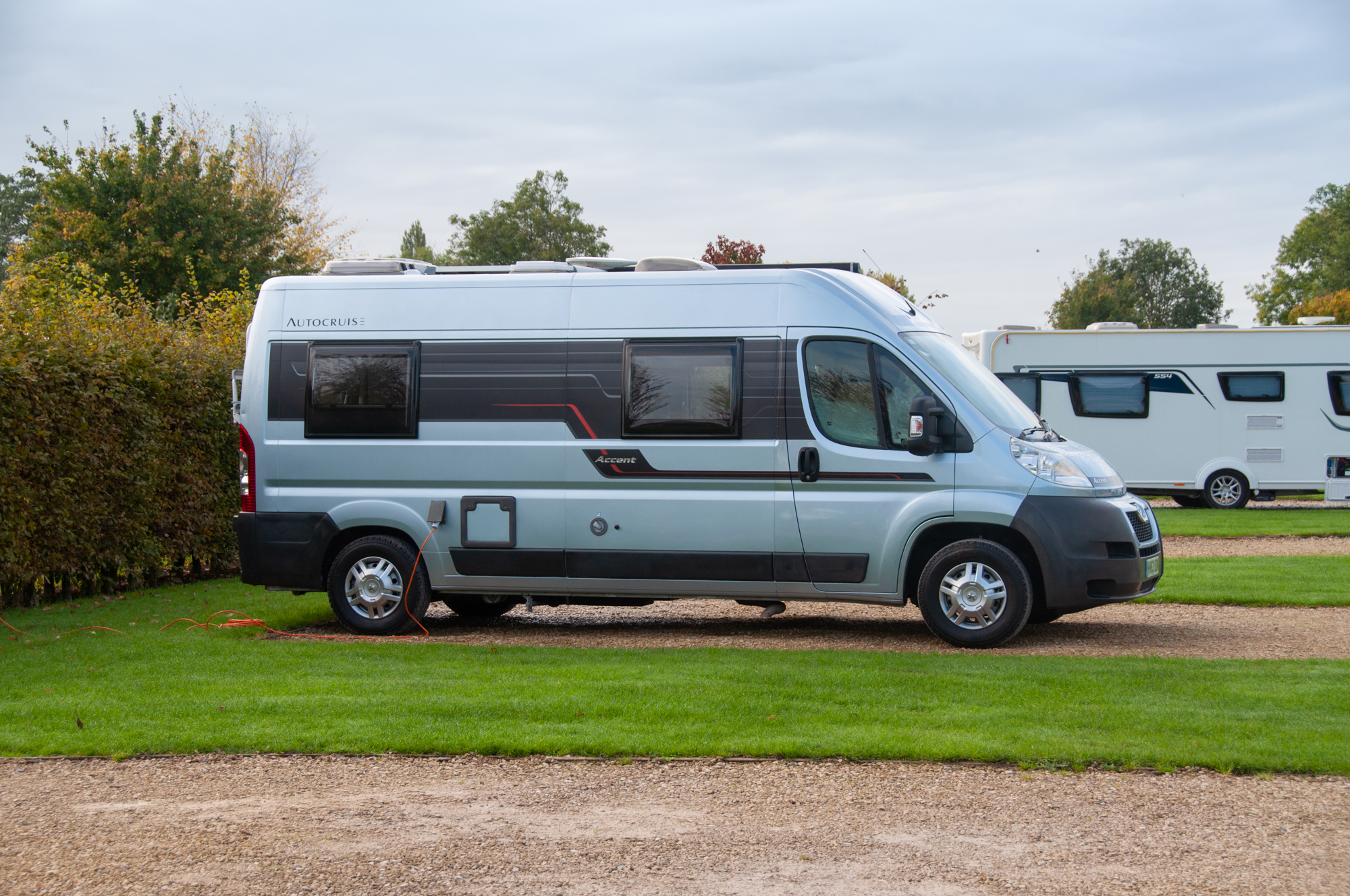 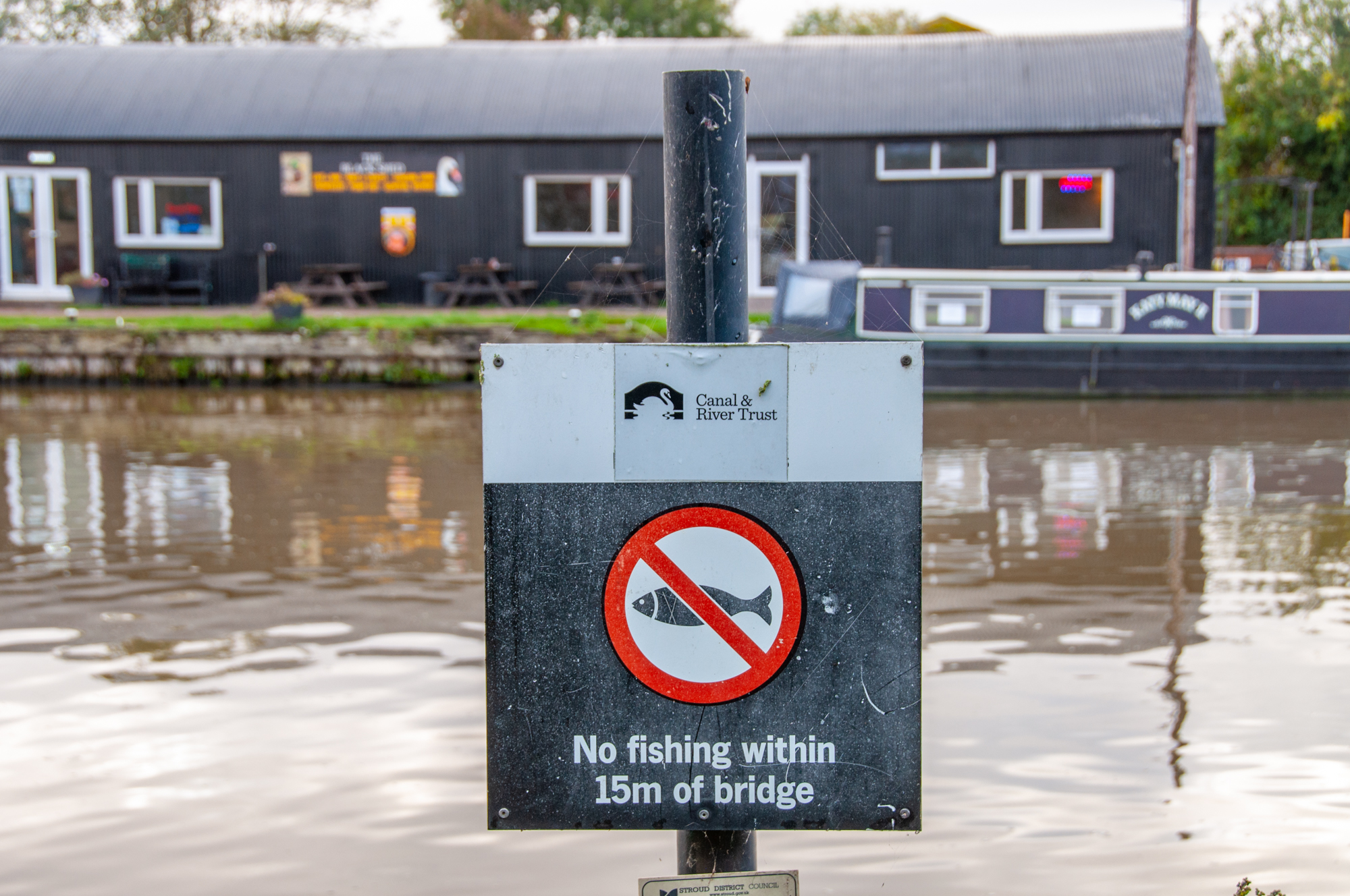 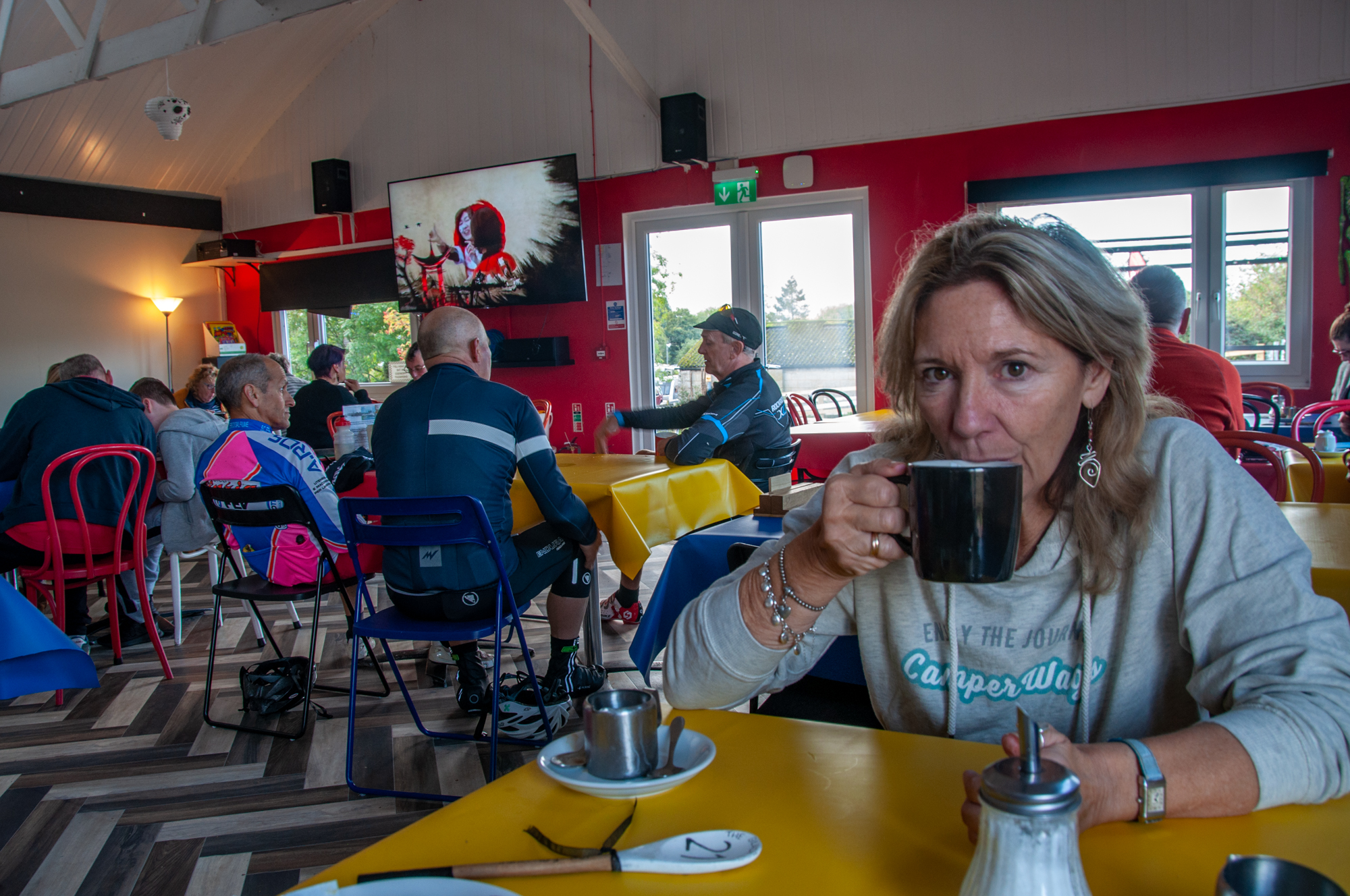 Obviously, I had turned it up even higher. So I tried to open the window. Once again, I’ve realised that working out how these things work is best done during daylight, and when you don’t actually need them to work. It took quite a lot of fiddling and gentle pressure (taking care not to break any of the fasteners) before I managed to prise the window open slightly (it wouldn’t open fully because of the bike rack). It was enough – and, much to my relief, cool air seeped in. Bowie the dog crawled over me so he could stick his nose in the gap and suck in the air too. Eventually he stopped panting. Then Sara tried her hand at turning the heating down. It stopped, but the noise of the heater continued. Presumably we now had just the water heater on – which was fine, as we weren’t going to die from overheating, and we could go back to sleep. Sleep lasted for a few minutes until the noise of all the geese flying overhead woke us up again… (one of the features of camping near the Wildfowl & Wetlands Trust, I guess). Actually it’s quite a nice way to wake up, although it’s sad to think that these geese are embarking on an immensely long and arduous journey to find a warmer climate, and it’s possible that not all of them will survive…

We made tea in the van, and Sara had a shower. When I went over to the shower block, there was a queue, so I decided to wait until later. Instead, we took the dog for a walk. A lady in the pub had recommended walking the dog along the far side of the canal, so that’s what we did. It was lovely walking along in the sunshine, as the boaters were emerging from the longboats. On the way back, we stopped at the Black Shed Cafe. We’d seen the place the previous evening and it looked interesting (but the pub was marginally nearer, so it won). We ordered breakfast – and they were showing the Wales v France rugby match on a big screen. When Wales had snatched a narrow (and somewhat lucky) win right at the end of the game, we walked back to the van. The site stipulated that checkout was no later than 11am and, as it was already 11.30, we felt we ought to leave.

Our plan was to visit Thornbury Sailing Club (which is where we’d helped out with a short film a few years ago and was such a picturesque location that we wanted to see it again) but we were prevented from getting there because the road to it was closed. So we stopped and took in the landscape from a nearby church, had a cup of coffee (made in the van, using the recently advertised coffee bags) and then travelled back towards the M5 and home.

So, our first trip was a success. We learnt a bit about the van. We managed to top up the water tank a bit before leaving the site but, as the facilities were so good at Tudor Park, we didn’t use the onboard toilet or shower, so we still have to try these out (and the subsequent ‘cassette’ emptying etc.) The dog seemed quite content in the van. The folding dog bowl (from caravanstuff4u.co.uk) worked reasonably well. The coffee bags were a revelation. There are a few rattles I’d like to sort out and there are a few things we need to put in the van (e.g. a map book for when the phone sat nav doesn’t work, kitchen roll and a drivers side cup holder). I’m sure we’ll learn more from our next trip.

Thanks for reading this. Bring on the next outing! 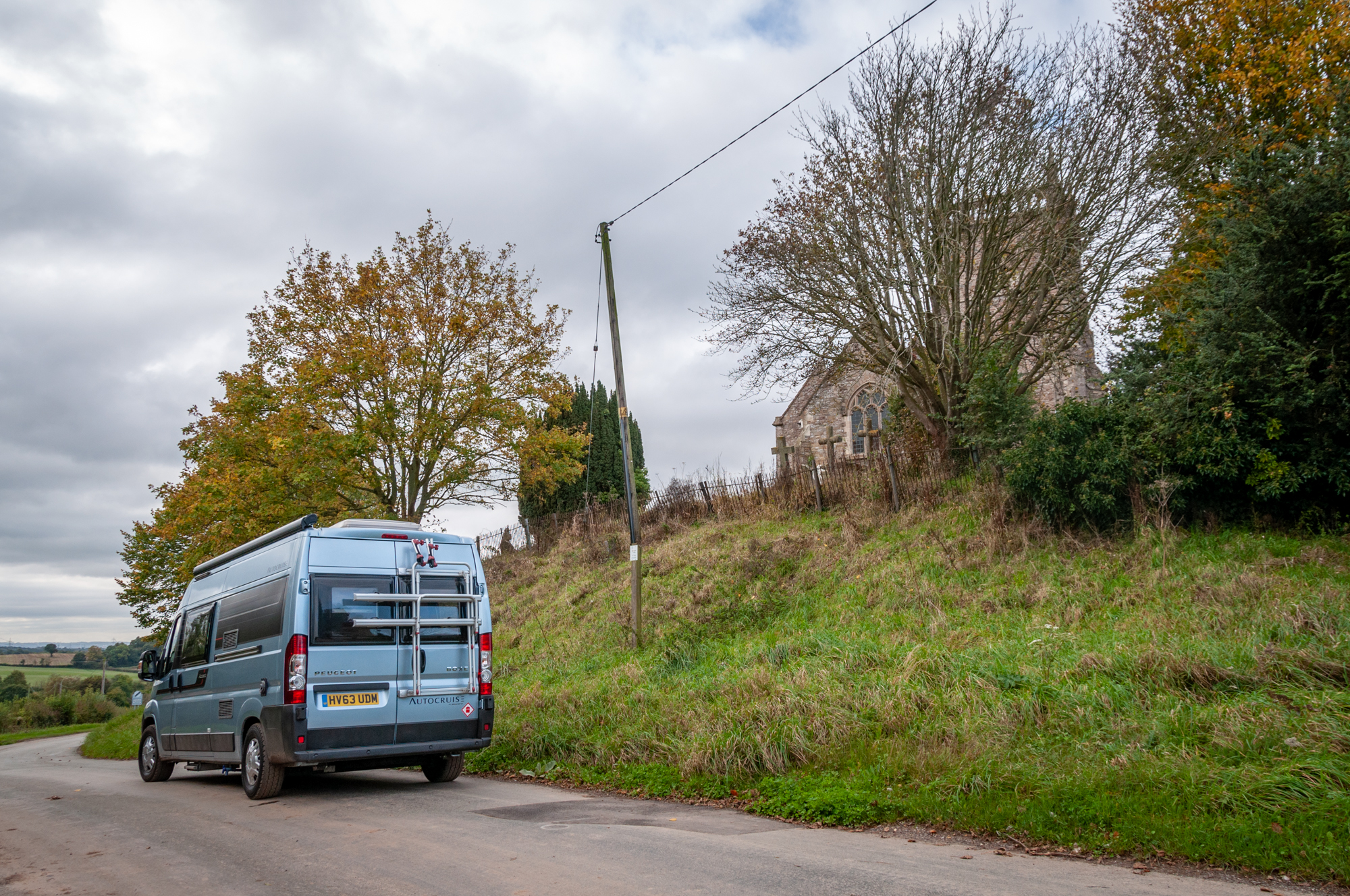 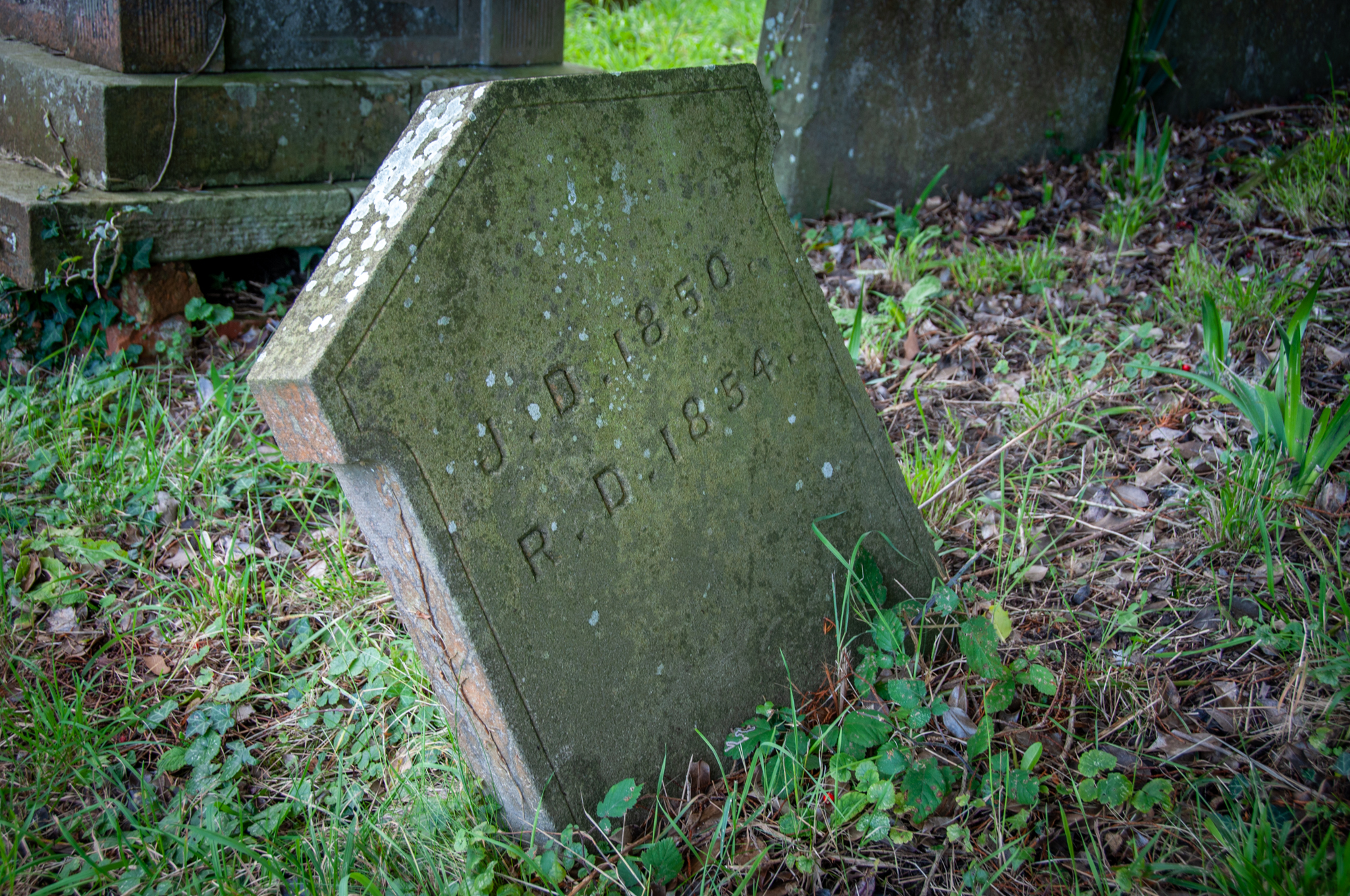 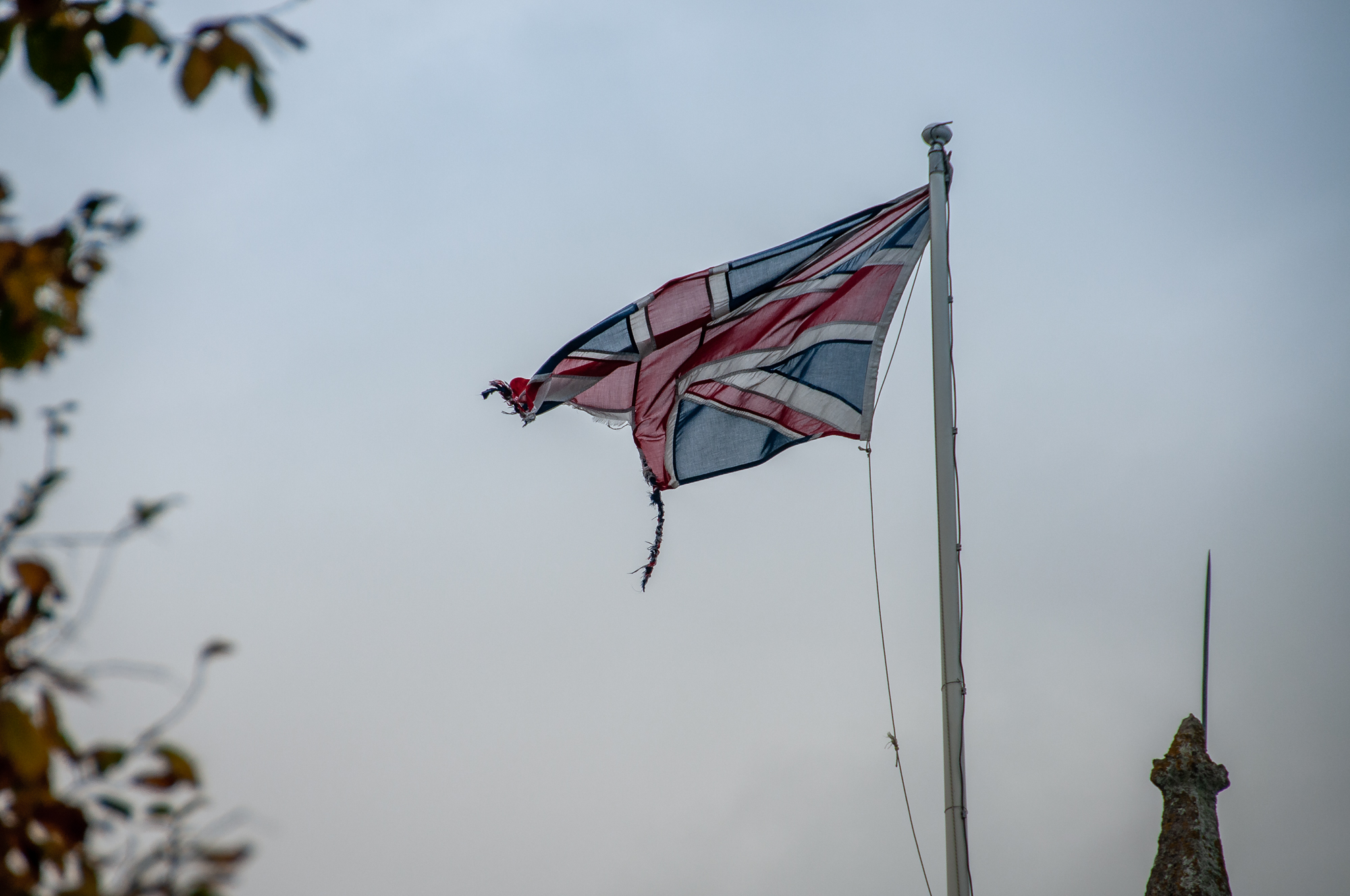