My son Daniel lives in Norway. The last time we saw him in person was about two and a half years ago. Lockdown, Covid and the distance has led to us only seeing him and his family on FaceTime (or similar).

So as he now has a daughter (as well as his 5 year old son) and it was going to be Vilde’s 2nd birthday – and we had never actually met her, we decided it was time we went over to Norway. In the past we have flown and then rented a car. This time, however, we wanted to take some of Daniel’s stuff that’s been in storage at our house for 10 years, and also our dog. So we decided to drive.

To complicate things, our work etc dictated to some extent when we could go – and that gap coincided with a wedding that we had been invited to up in York. So we decided to go to the wedding – and then proceed on to Norway. We had a credit from the ferry company for a trip to France that we had booked but did not go, so we transferred the credit to the ferry from Newcastle to Amsterdam.

Packing for this trip was interesting. We had all of the clobber associated with a wedding – suits, smart shoes etc. plus all Daniel’s stuff, plus everything we’d need for about 10 days on the road, plus the dog!

We set off on Wednesday 23rd March at about lunchtime. We went to see Philippa, a friend of Sara’s, in Clifford first and had a cup of tea and a chat, and then drove from there to the wedding reception venue (where we had been led to believe that we could camp overnight in the car park). We parked up, walked the dog and then got changed for the informal ‘introduction’ evening. We had a few drinks and met a number of the other wedding guests, many of whom were staying in the venues accommodation. So we were the only ones camping.

The next day it was the actual wedding. We got up, walked the dog, had some breakfast in the venue and met more of the guests. Then we started to get ready. While Sara was away getting a shower and getting dressed up, I had a visit from the venue owners advising that we should not have camped overnight, and that we needed to move the van. They also complained that we had a dog. I explained that we were about to go off to the wedding so we would move it later. They then gave us the details of a local campsite. 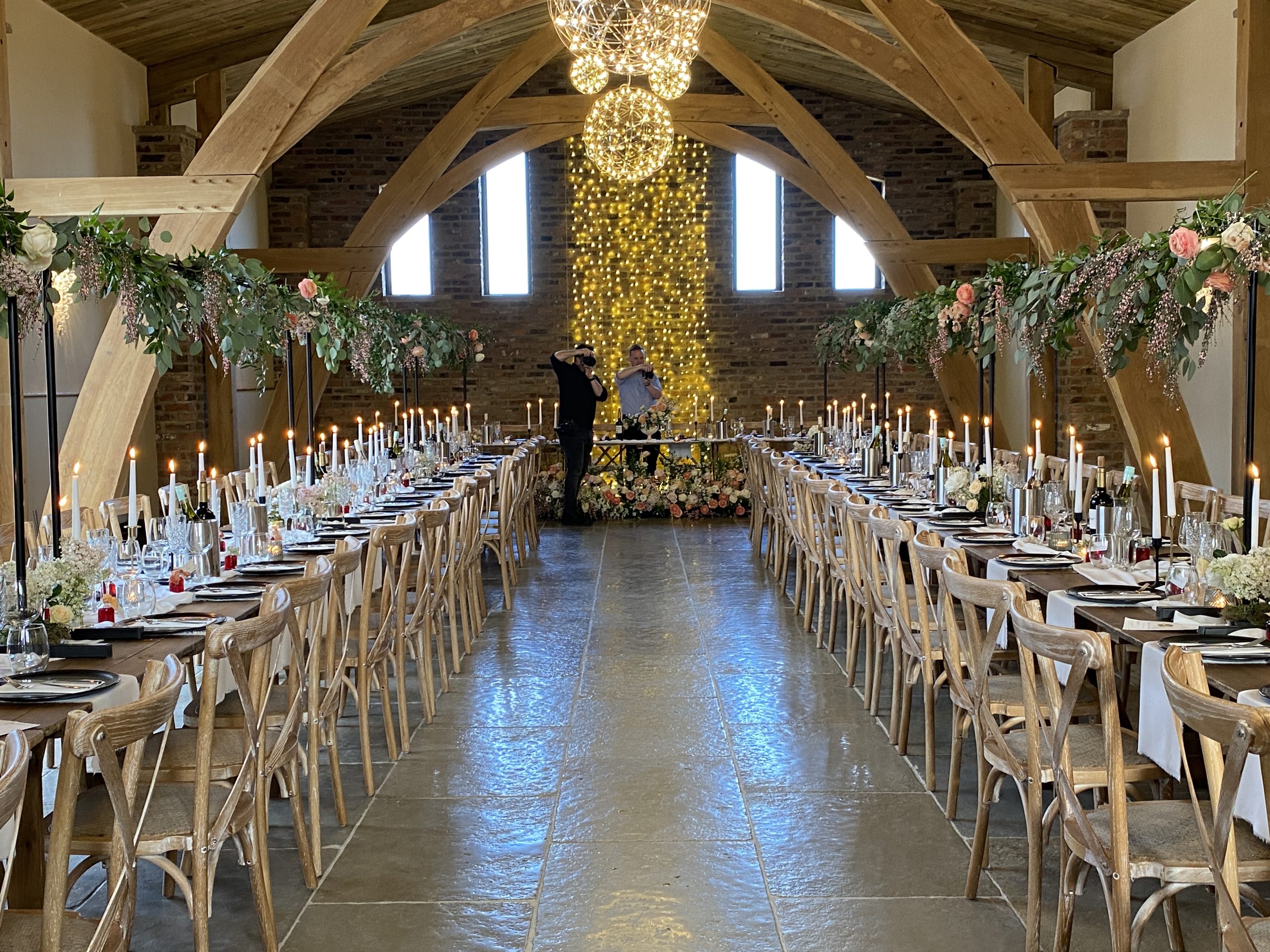 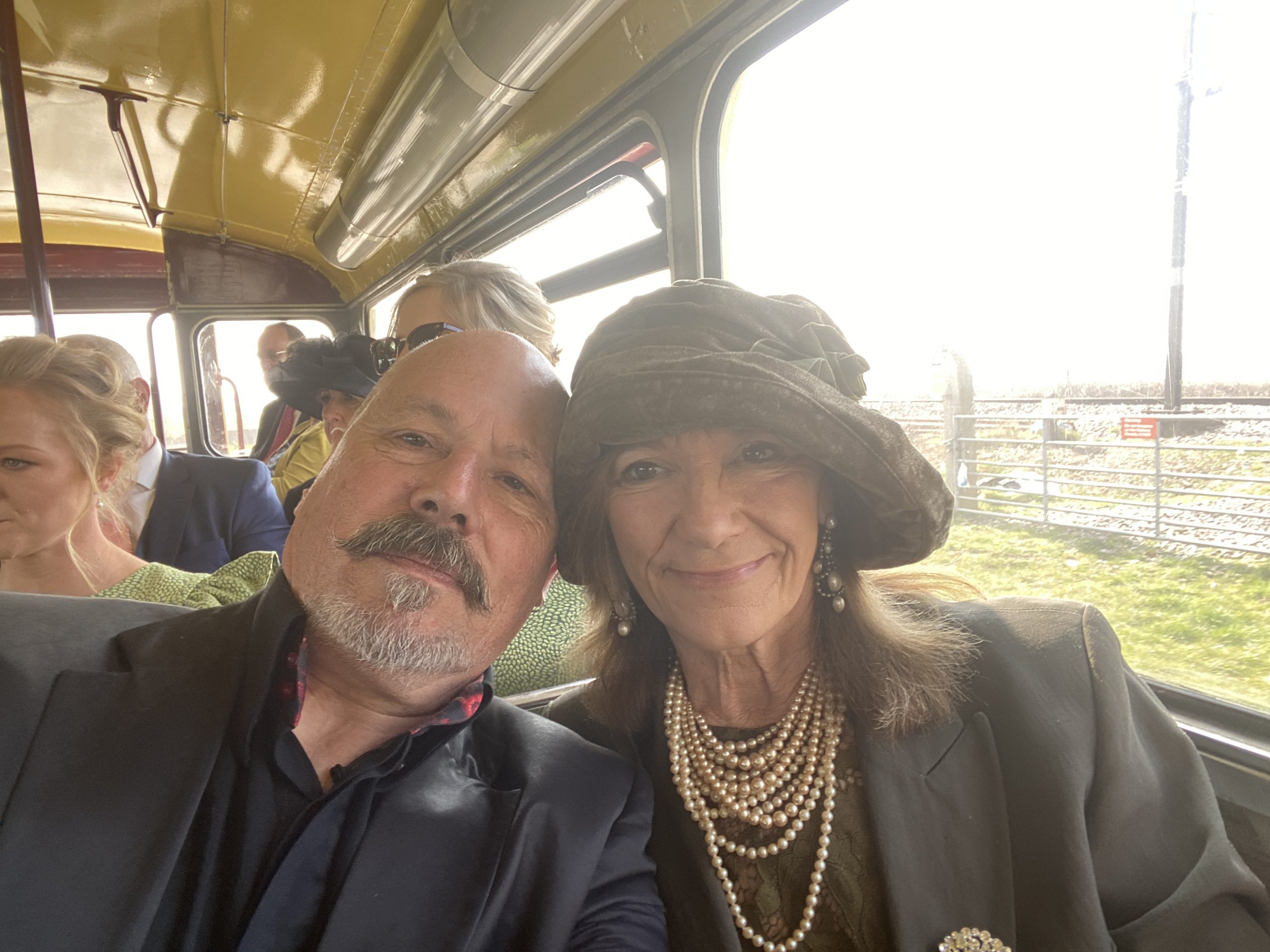 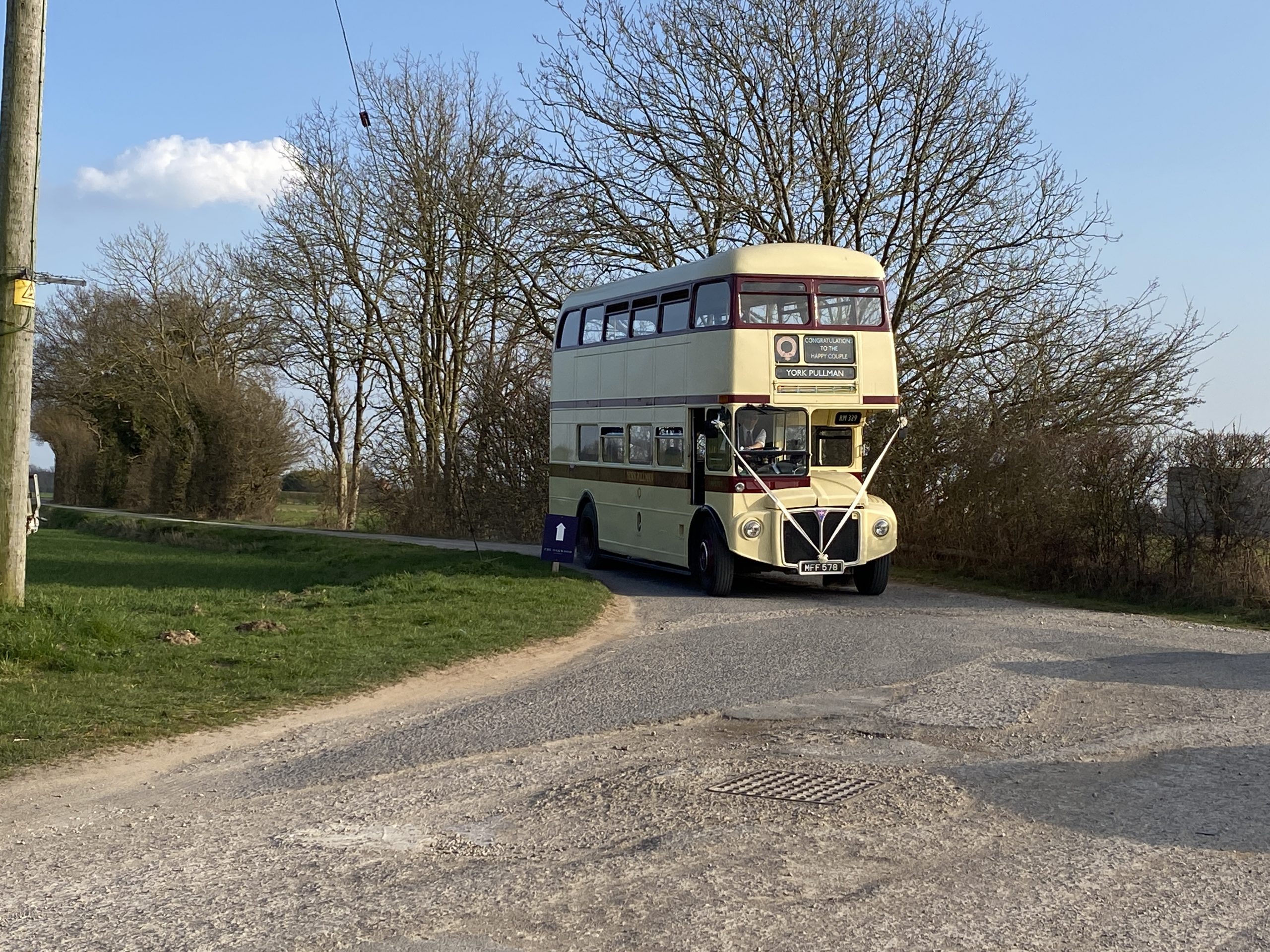 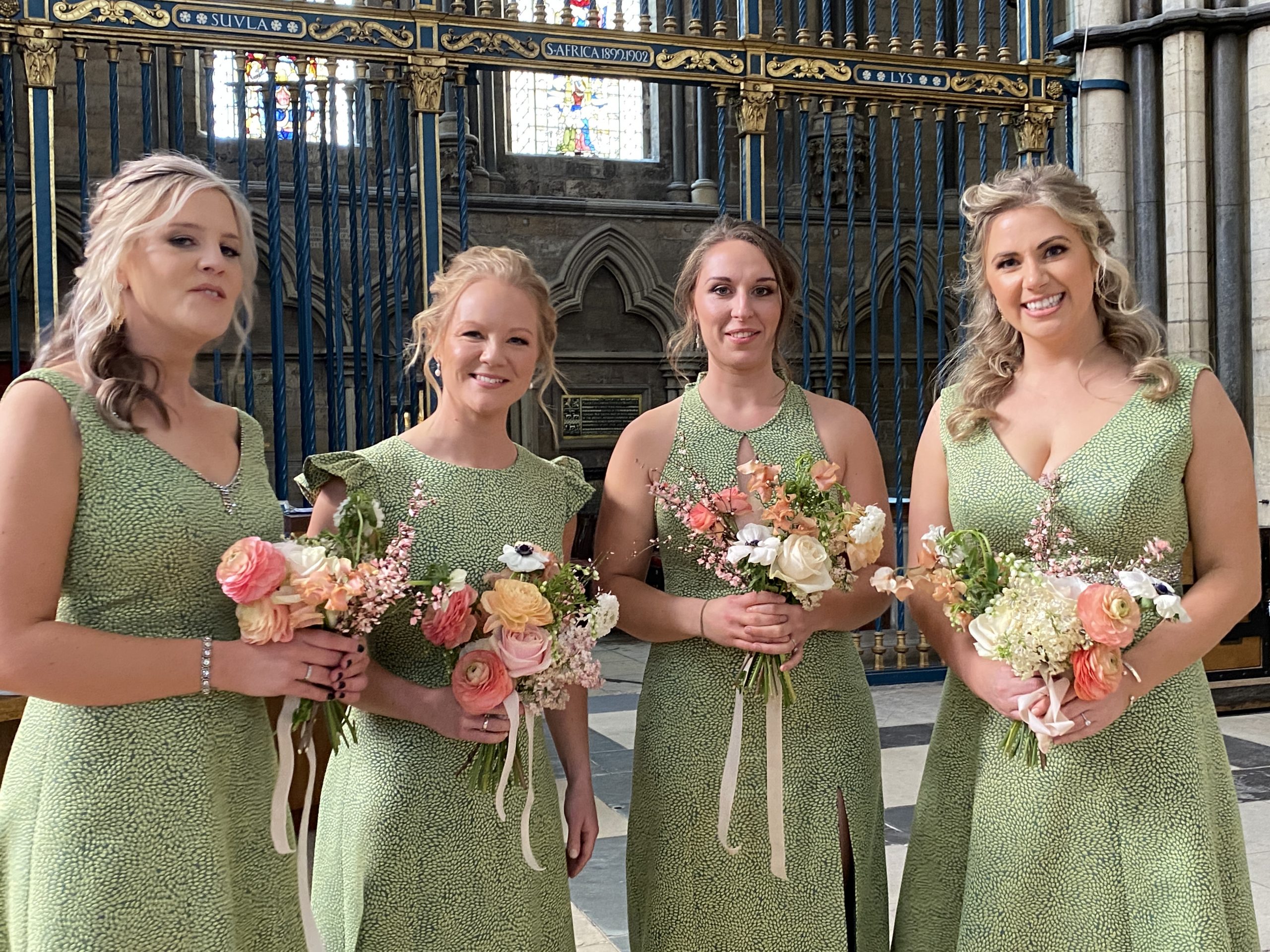 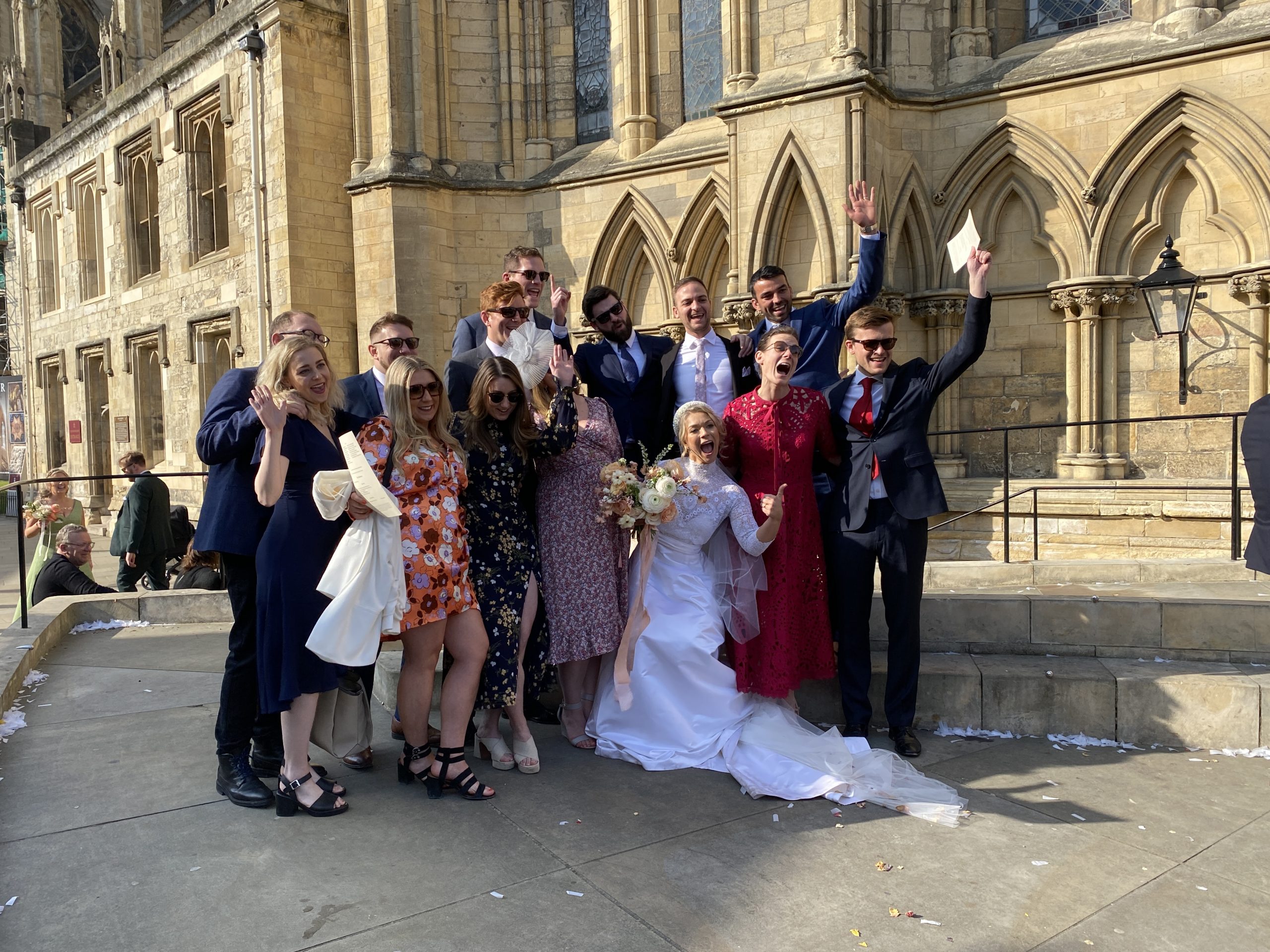 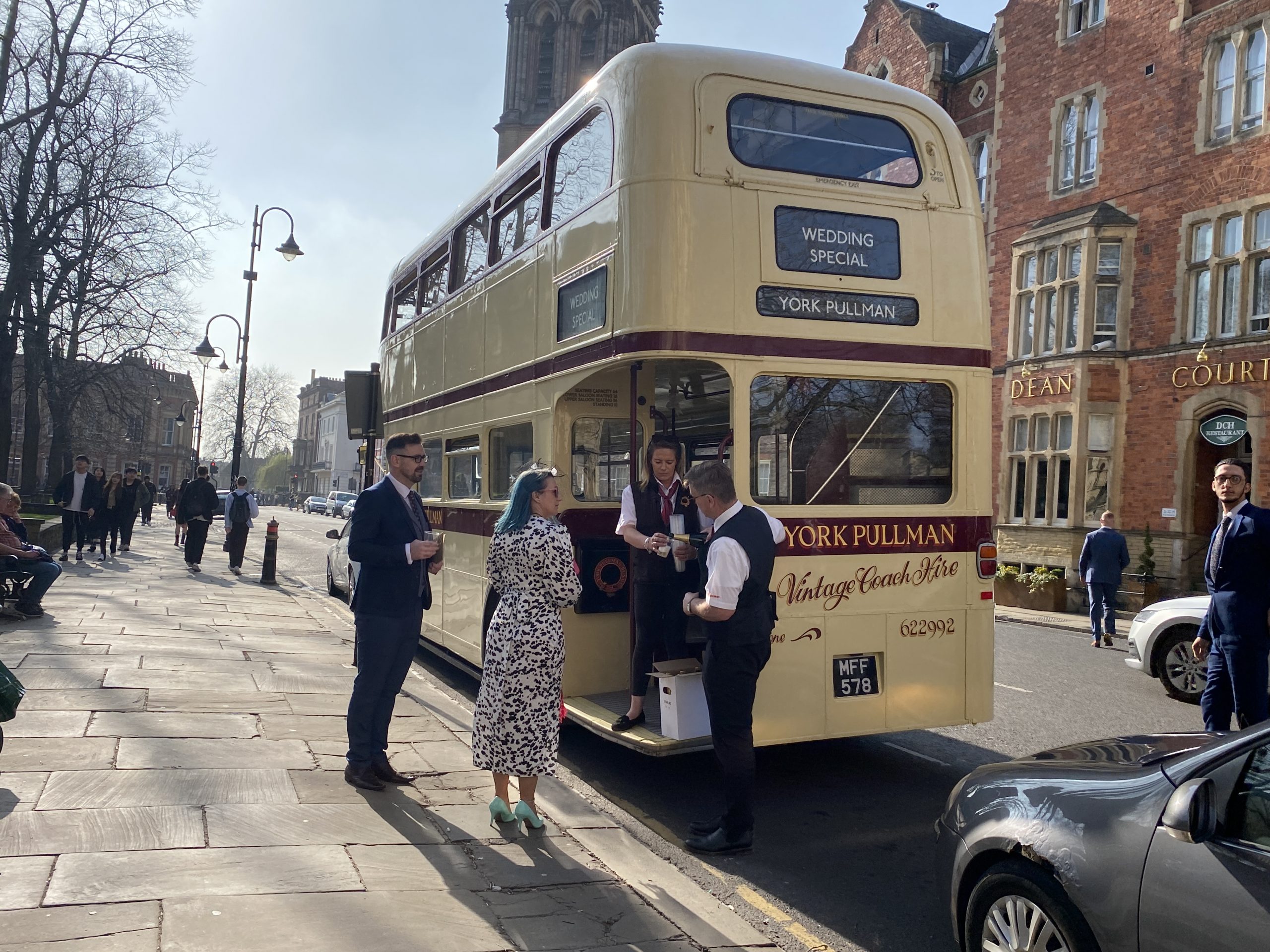 The beautiful double-decker bus arrived and we set off for Yorkminster. The bride had asked if we could video the services that they could have a record of it. So we set up the camera in the pulpit and, as result, got the best view of the service. When it was over, the now-married bride walked outside and were completely covered in confetti. The bus took us back to the venue and everyone got to drink our fizz from our vineyard, which we had brought along.

Back at the venue we had the meal and the speeches. After that the staff reminded us about moving the van so we rang the campsite and then had to leave the wedding to drive there. The site at Cawood was really nice, set around a lake. Sara was a bit squiffy by this time so we didn’t go back to the wedding. We just retired for the evening, knowing web still had a long journey ahead of us. 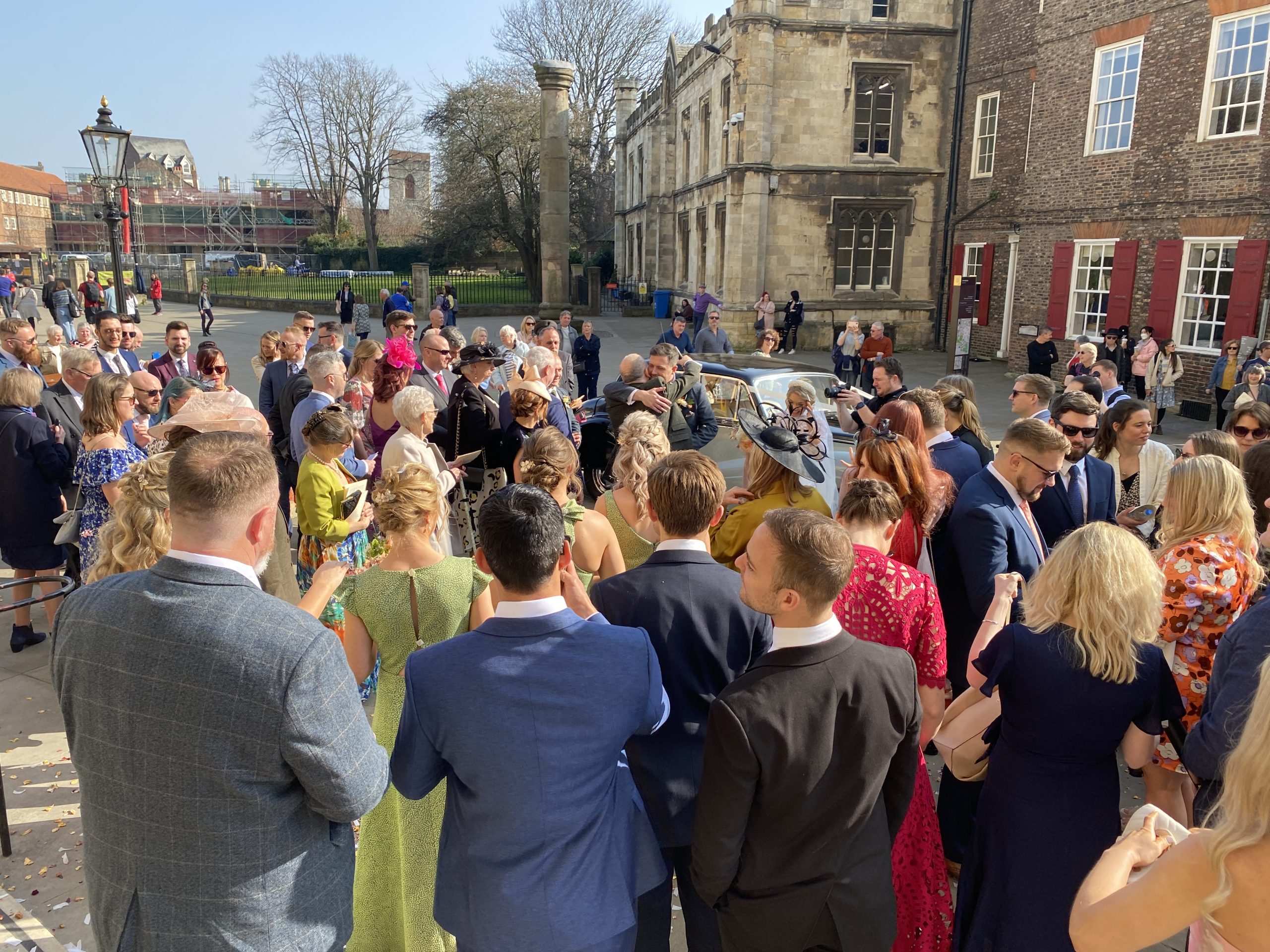 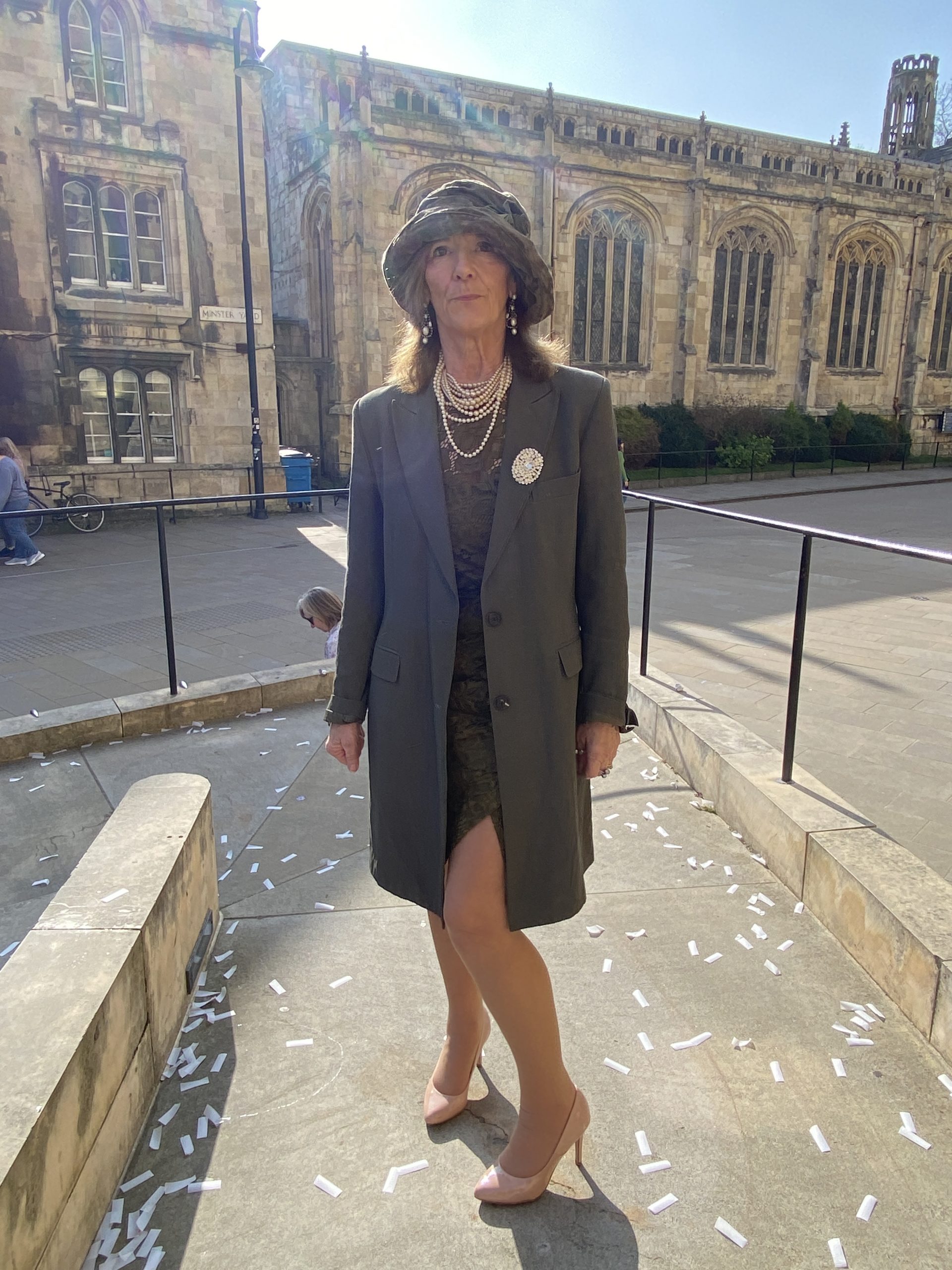 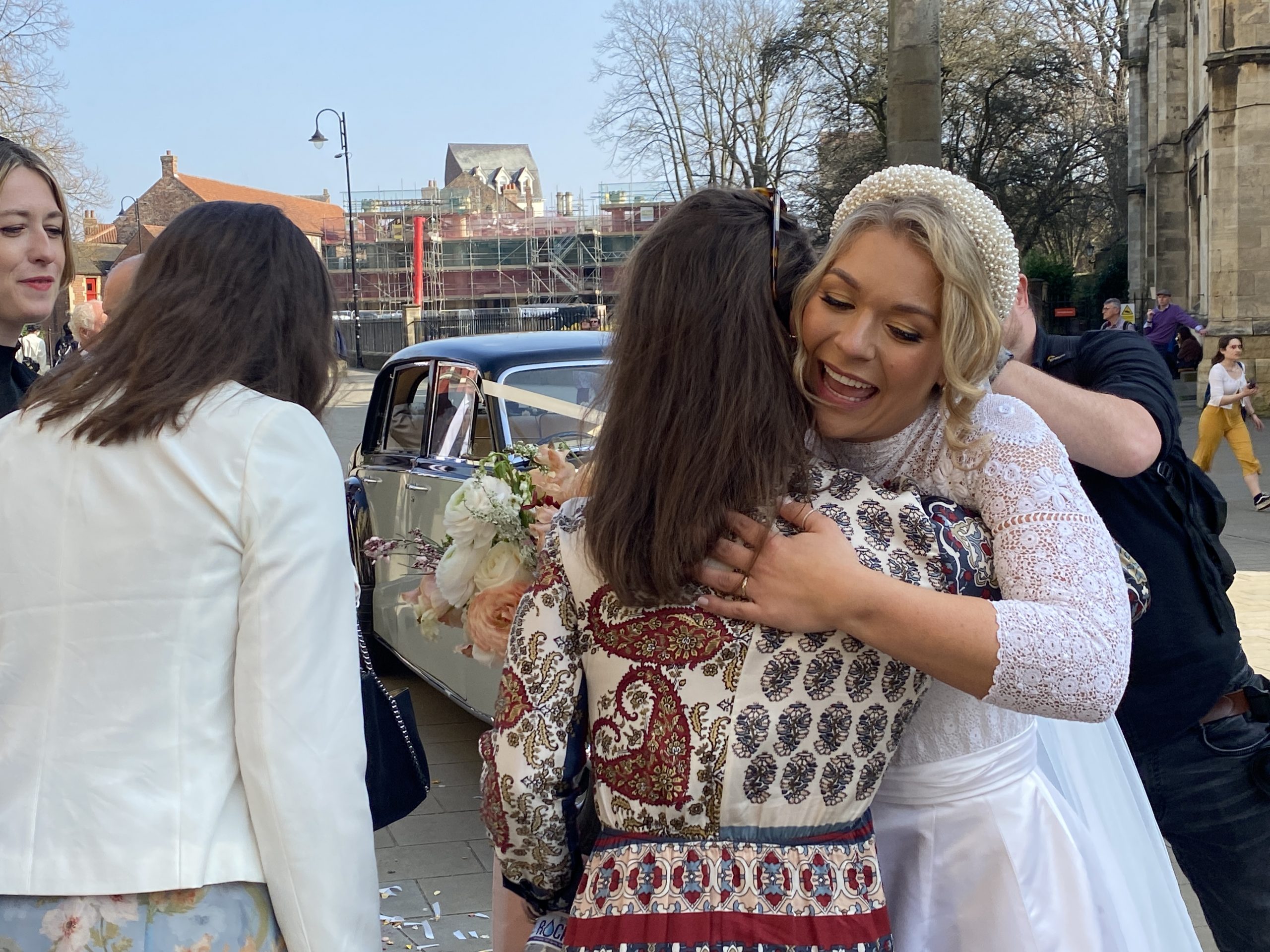 The next day (Friday 25th March) was a beautifully sunny, warm day. We got up and had breakfast and then walked the dog. It was so warm, we were wishing we had packed shorts. We actually sunbathed for a while. Our ferry wasn’t leaving until 5pm so we had plenty of time – or so we thought! We set off at around lunchtime and drove towards Newcastle. We reached the ferry terminal at about 4pm and found that we were one of the last vehicles to check in. Once on the ferry, it left immediately. We went to get our cabin key and decided to upgrade to a ‘dog-friendly’ cabin, which cost an extra 65 euros. It meant that Bowie did not have to stay in the van. We then found the ‘dog walking area’ which is just part of the end deck which someone hoses down every now and then. After getting some beer, wine and nuts etc. from the on-board shop, we then stayed in the cabin until the morning, when we were woken up with the announcement that we were arriving in Amsterdam. 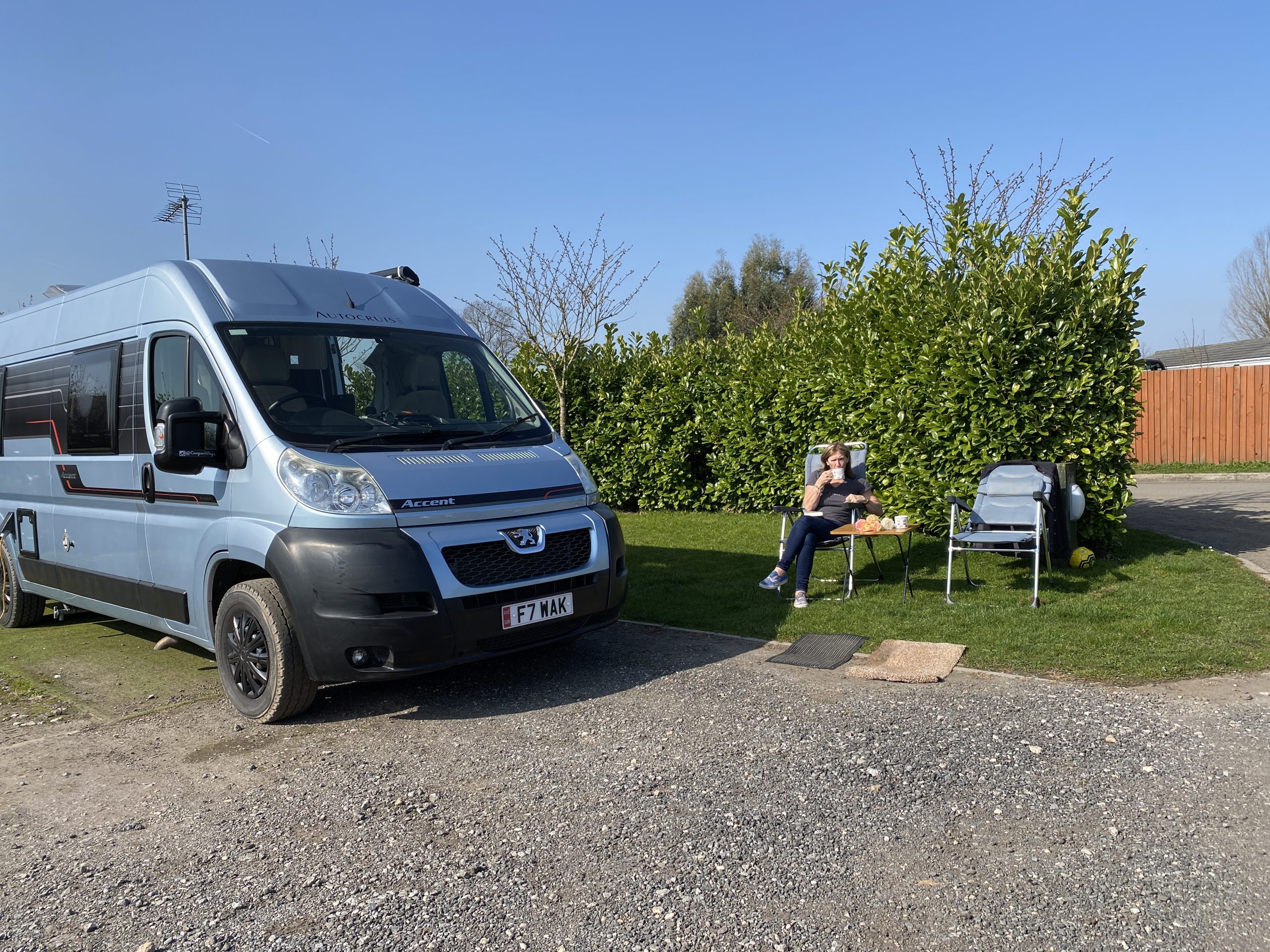 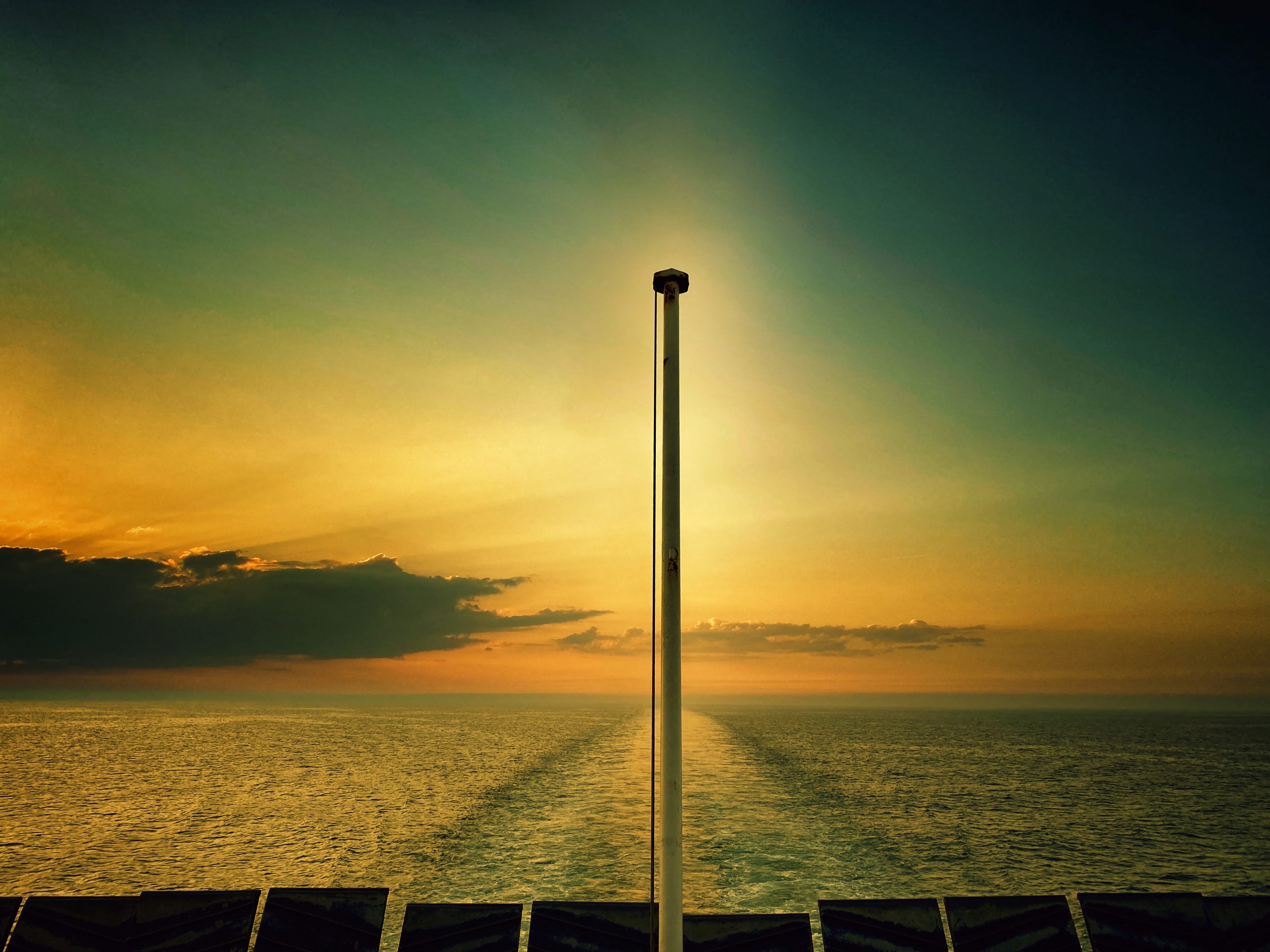 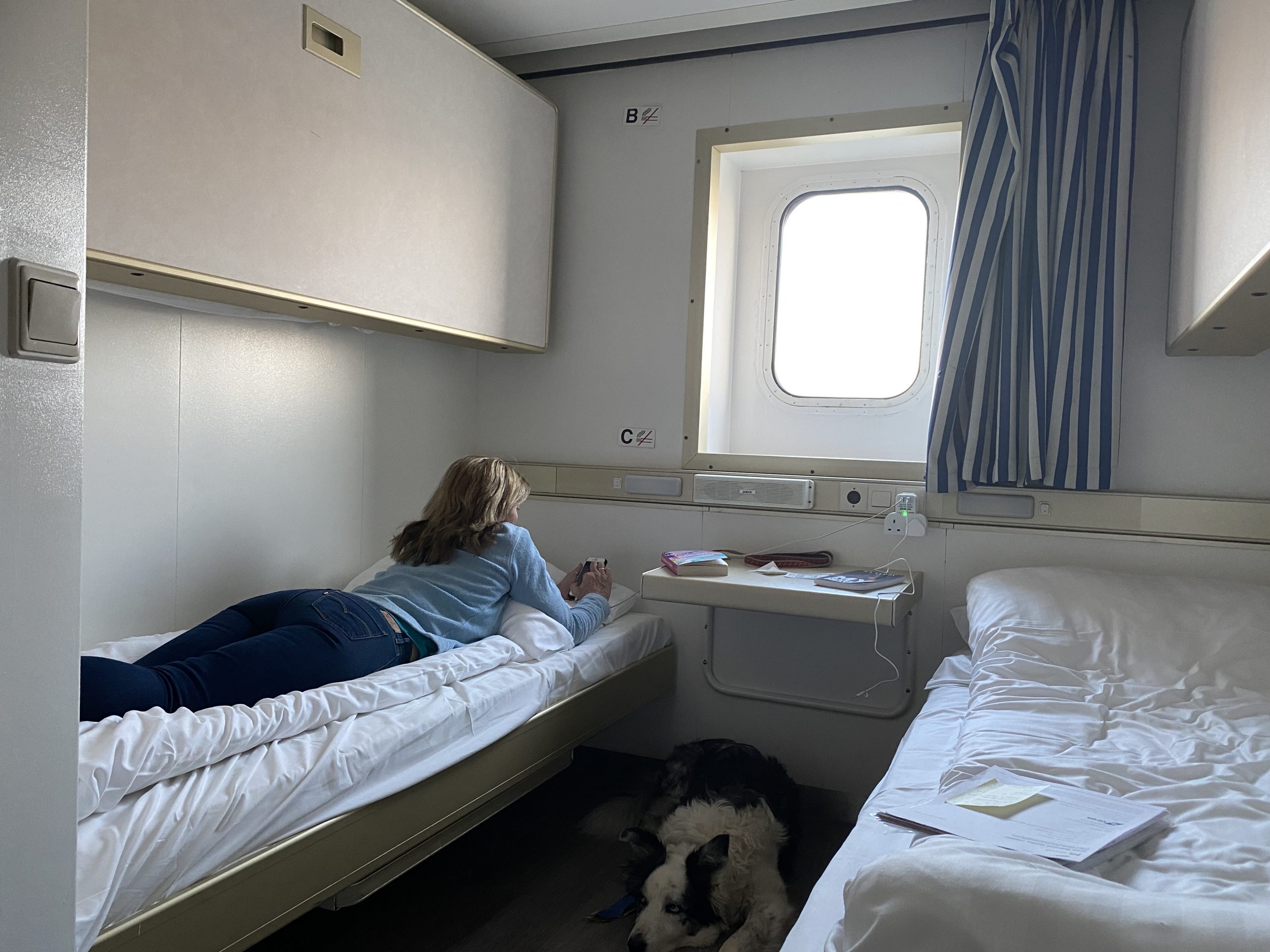 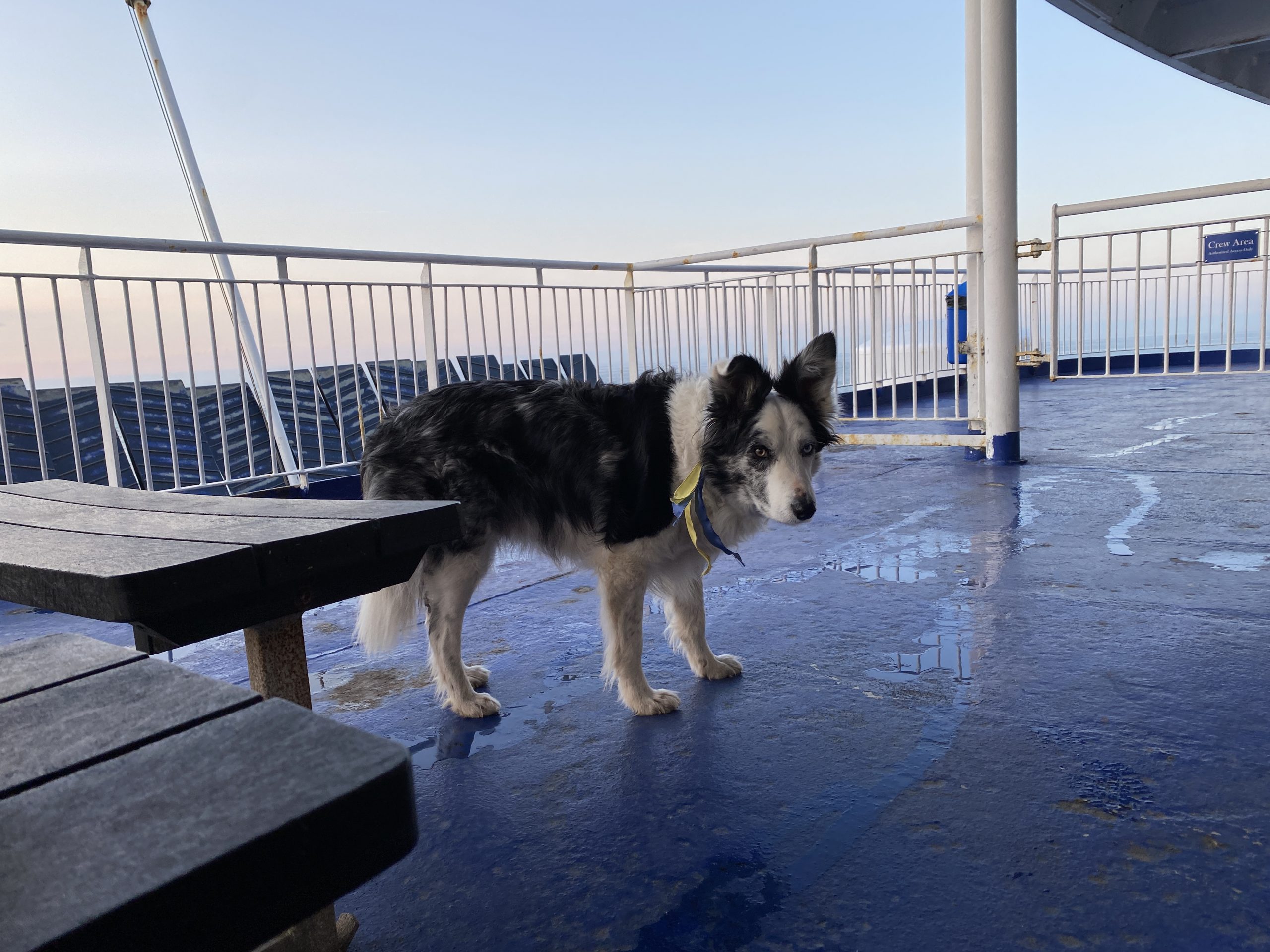 We drove off the ferry and through Amsterdam, heading towards Germany. Knowing that we needed to get to Norway by Sunday we just drove for as long as we could keep our eyes open. I drove though Holland. Sara did Germany. Germany was particularly hard because of roadworks and diversions around Hamburg. It was really busy there and it looked really industrial. Not our favourite town. I took over for Denmark. We were welcomed in Denmark by the border patrol who pulled us over and, speaking in impeccable English, we were wished a pleasant journey through Denmark. We eventually reached Kolding in Denmark and decided to stop for the night in a lorry park. The restaurant was still open so we ordered a meal before retiring back to the van for the night. 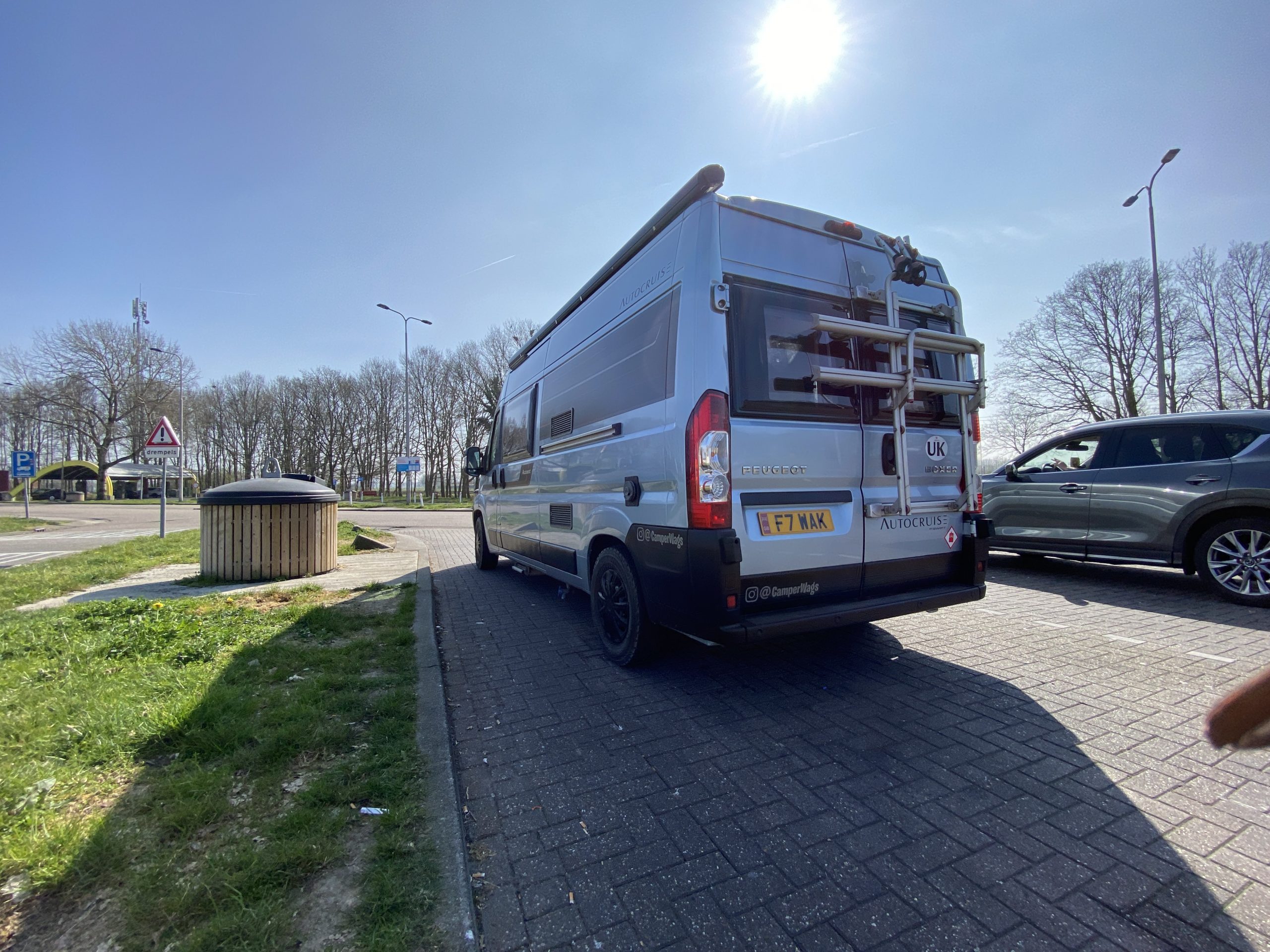 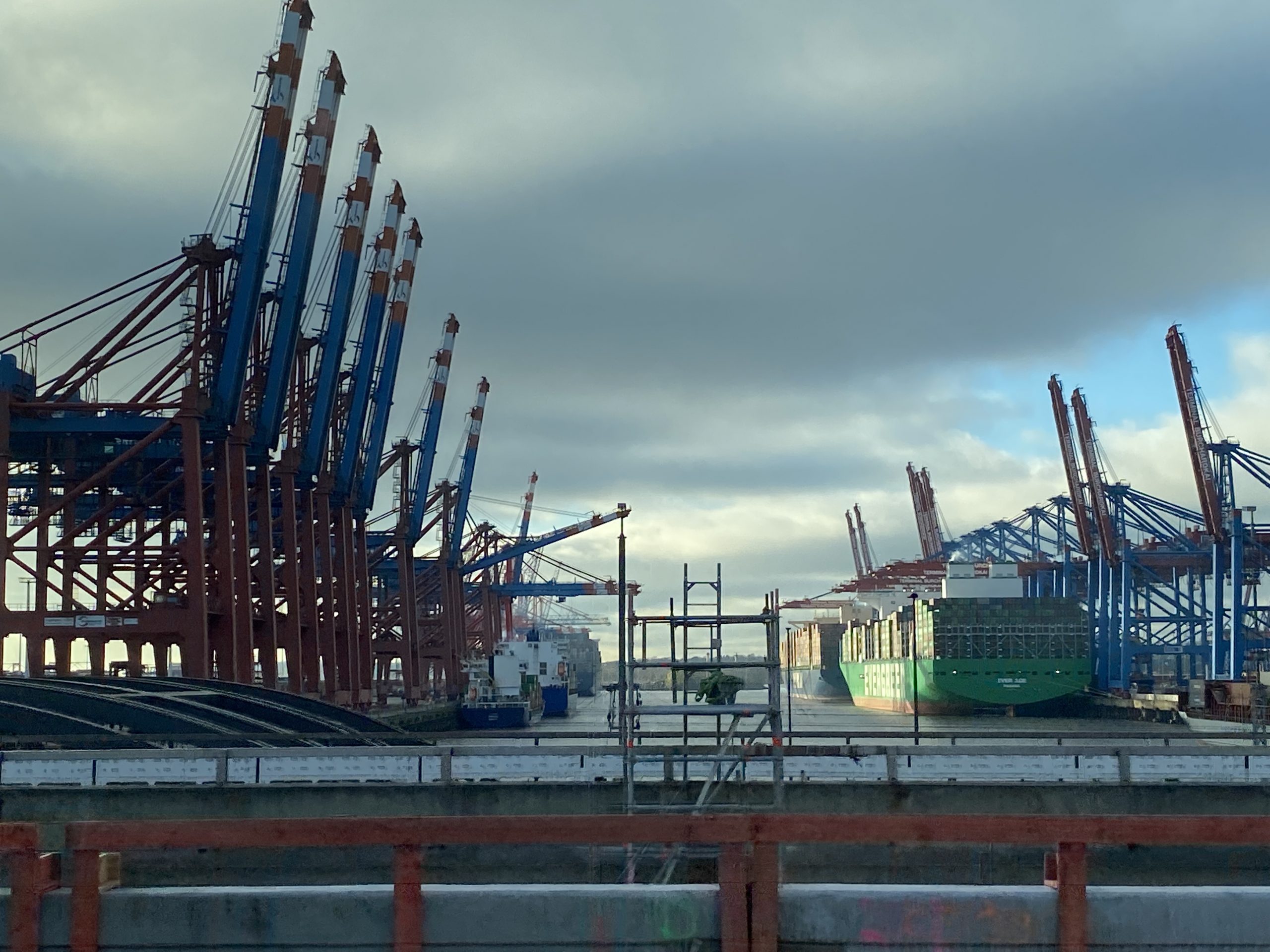 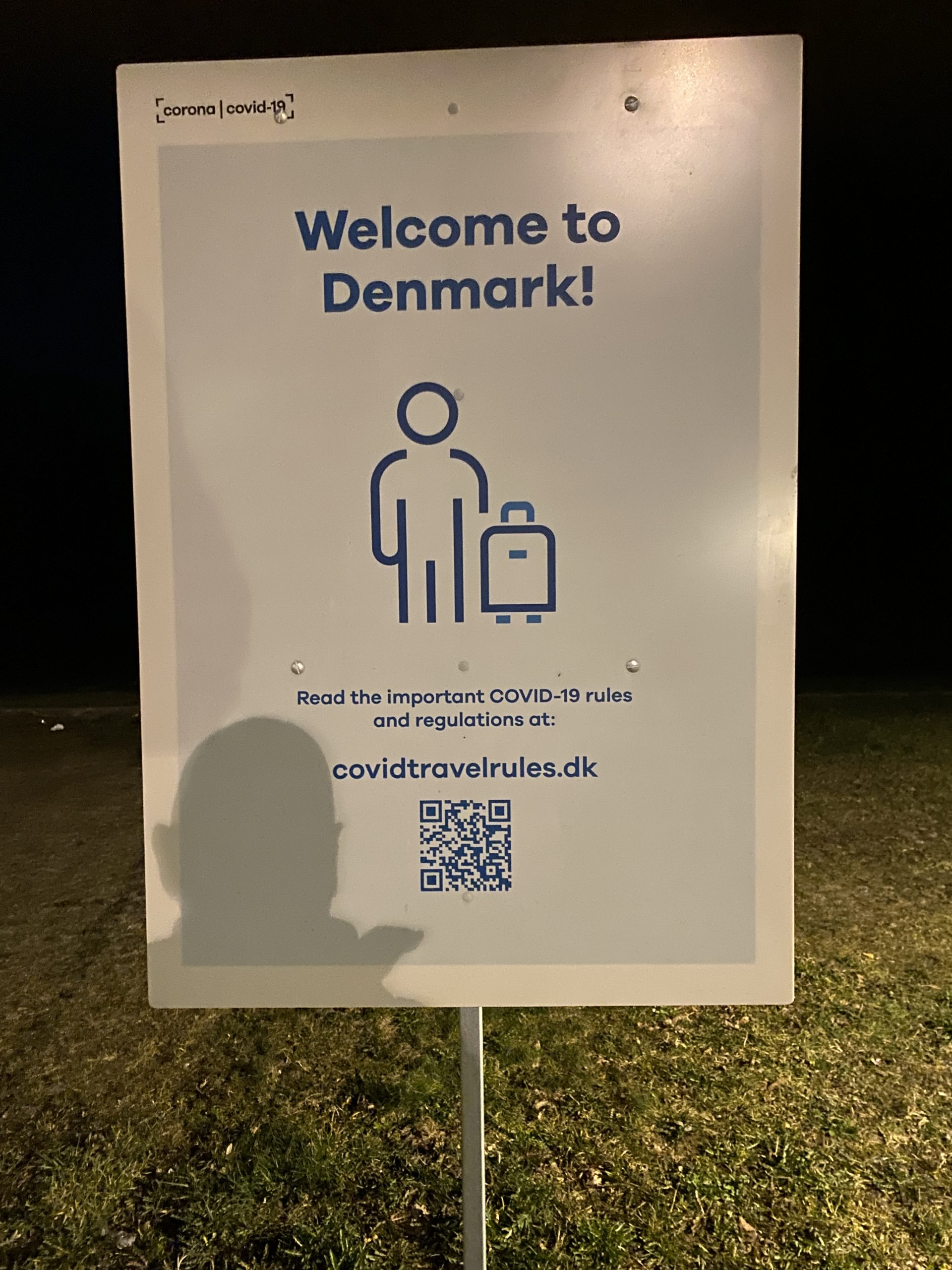 The next morning we got up quite early, walked the dog around the services area and then set off. We’d been told about The Bridge (Oresund) which leads from Denmark to Sweden, and that we had to pay. So we’d paid online (365DK – about £42 each way). We approached what we thought was The Bridge only to find out that there is an earlier bridge from one part of Denmark to island that Copenhagen is on. So that cost another 250 Danish Krona (about £28 each way). We skirted Copenhagen and proceeded over the Oresund and into Sweden. We had to stop at the barrier but the barrier just opened by recognising our number plate and that we had already paid. The two bridges across the sea are very impressive. 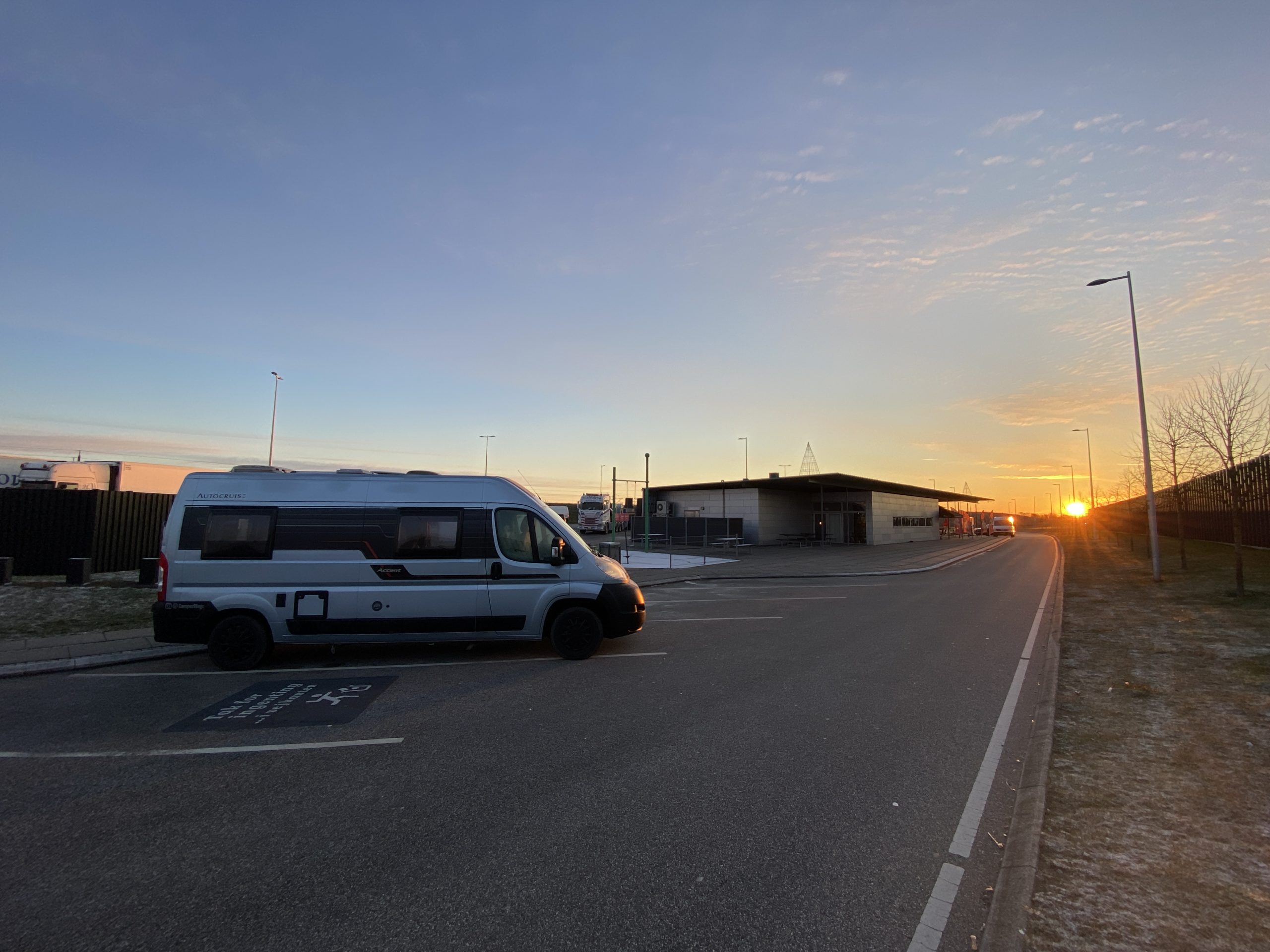 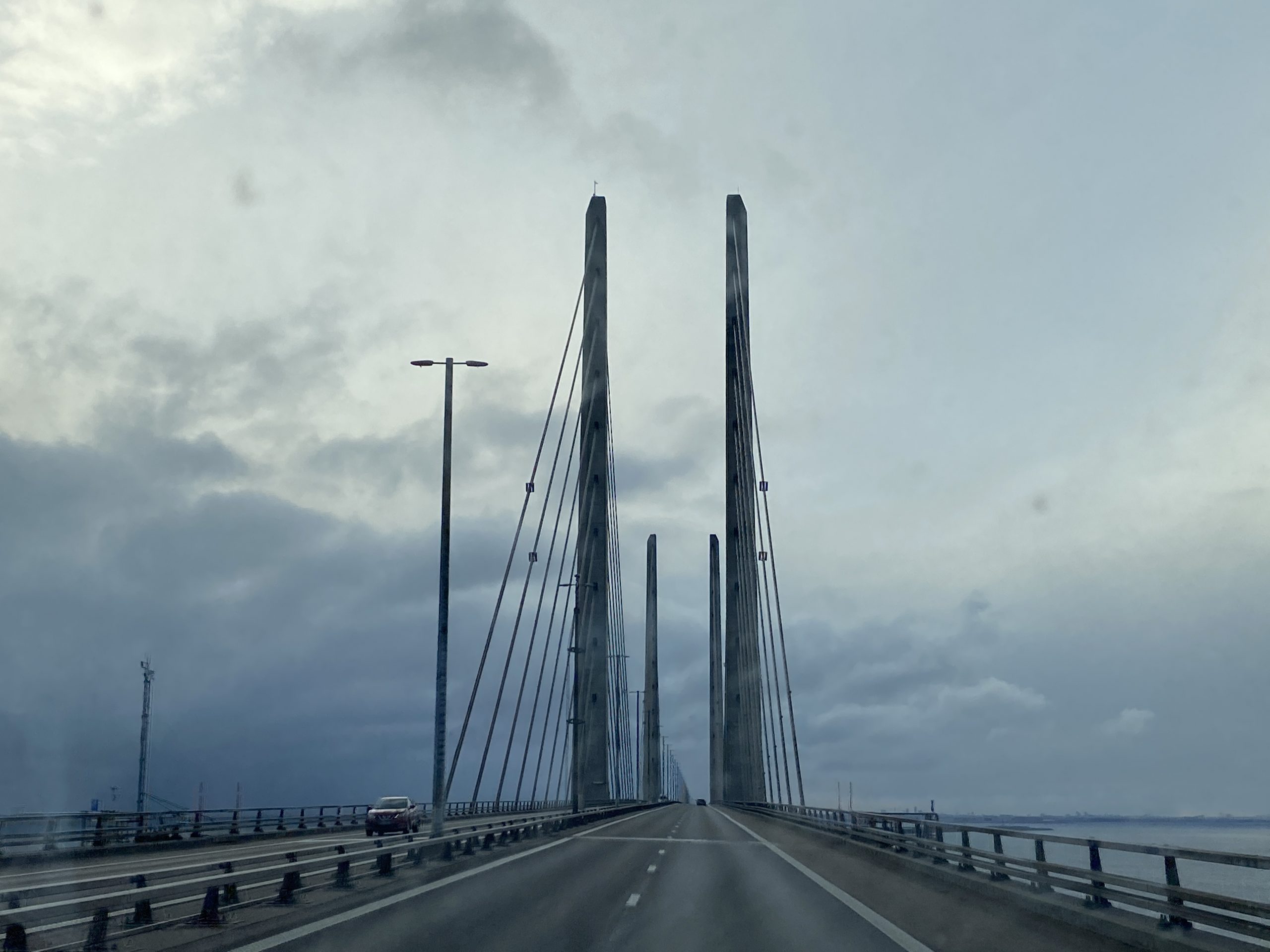 We drove up through Sweden towards Norway. The journey was long but uneventful. There wasn’t much to see and not a lot of traffic. We stopped a few times to walk the dog, get fuel etc. In the evening we crossed into Norway. There was no border control or checks (so the race to get there before the tapeworm treatment expired was unnecessary this time). We arrived at Daniel & Bennie’s house. They were out. 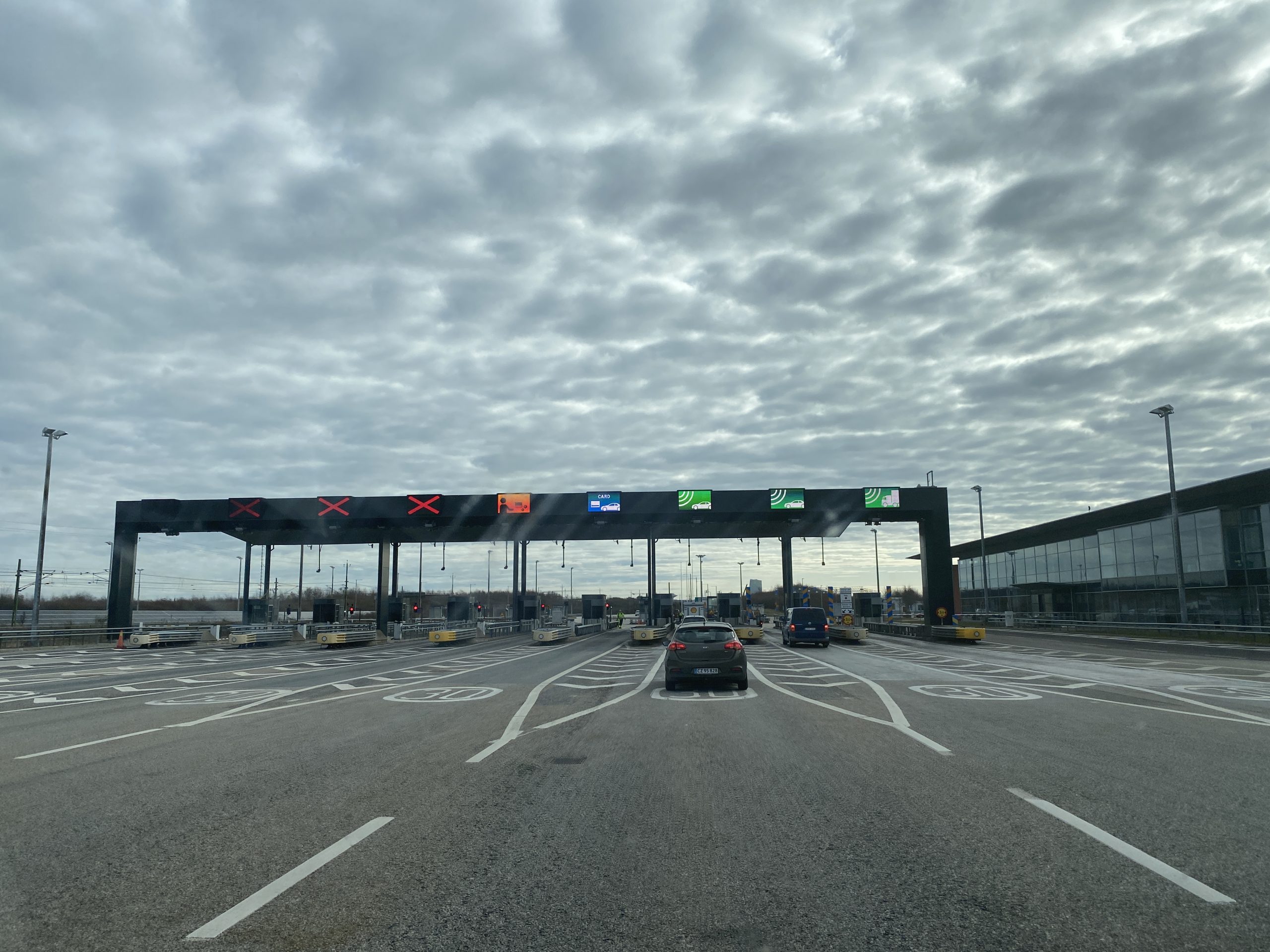 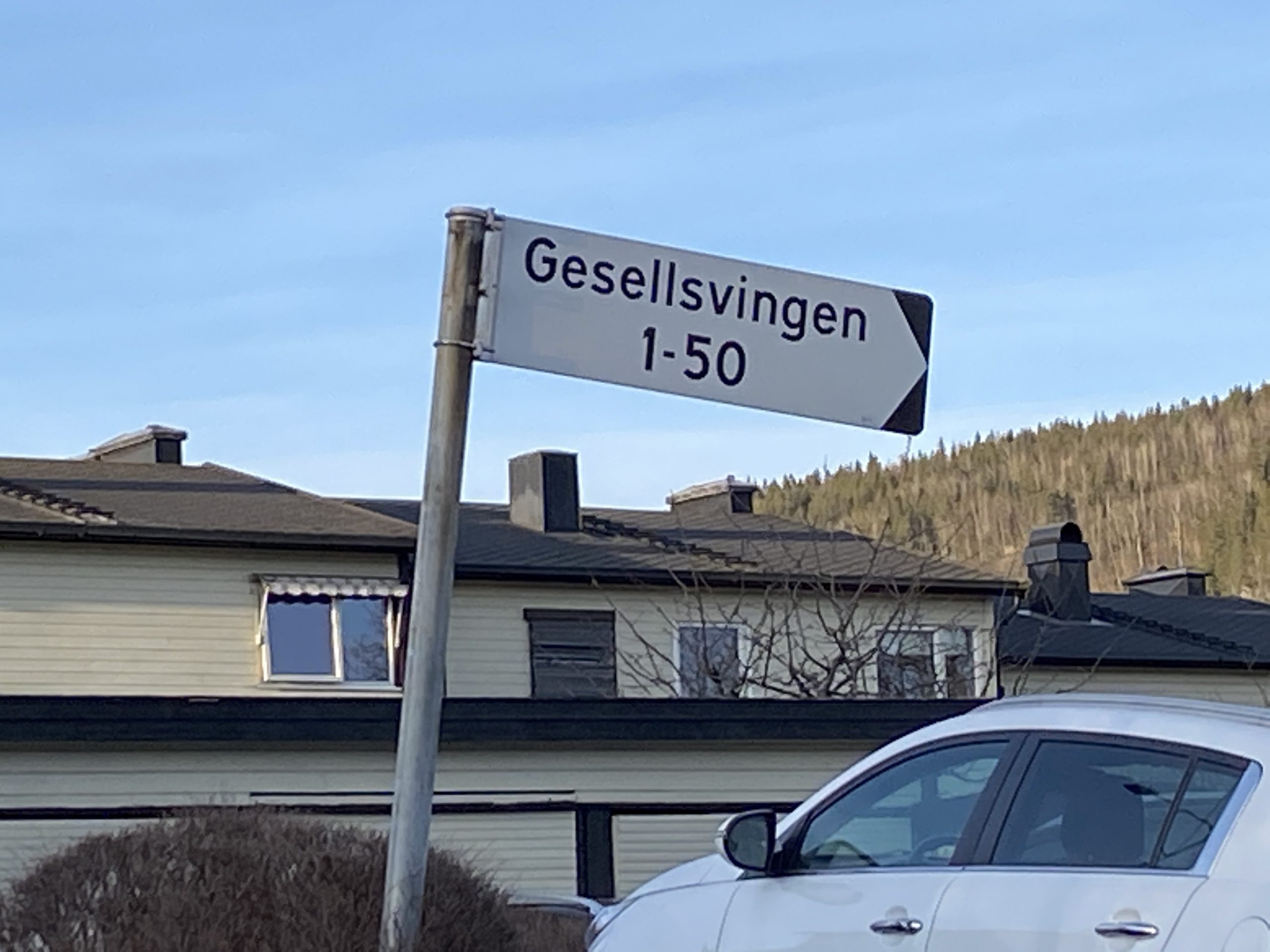 We spent two nights at Daniel & Bennie’s house in Oslo. 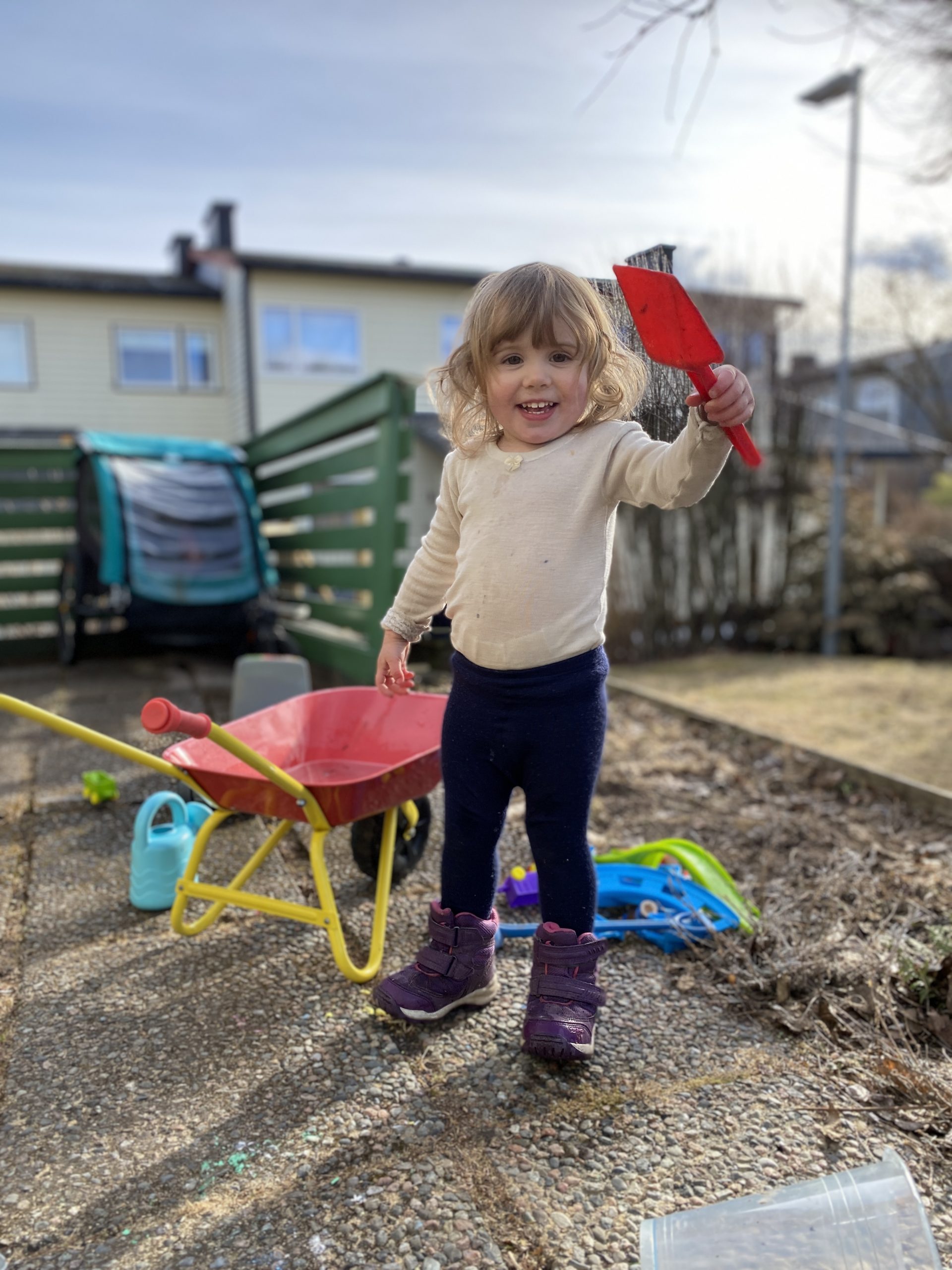 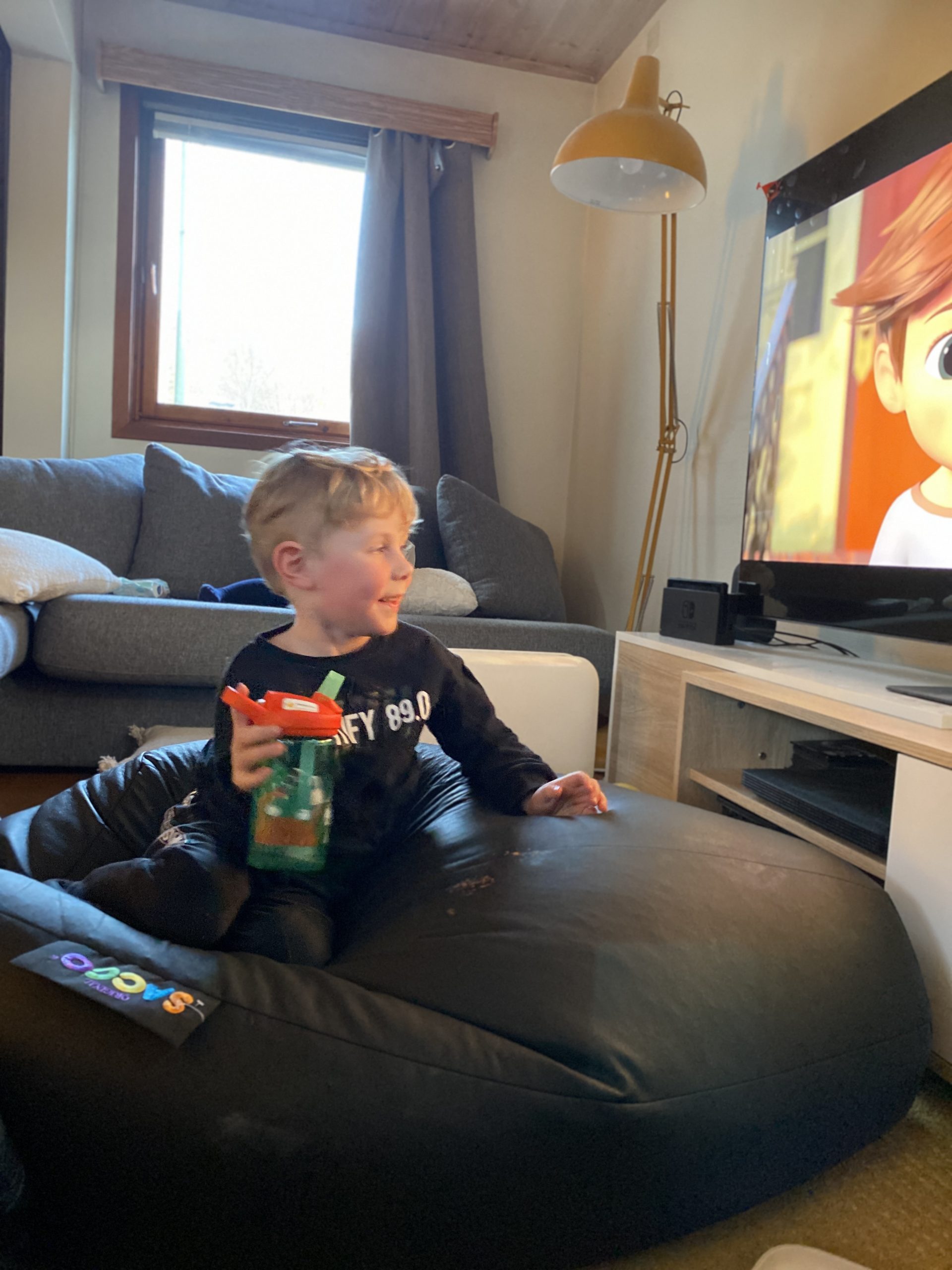 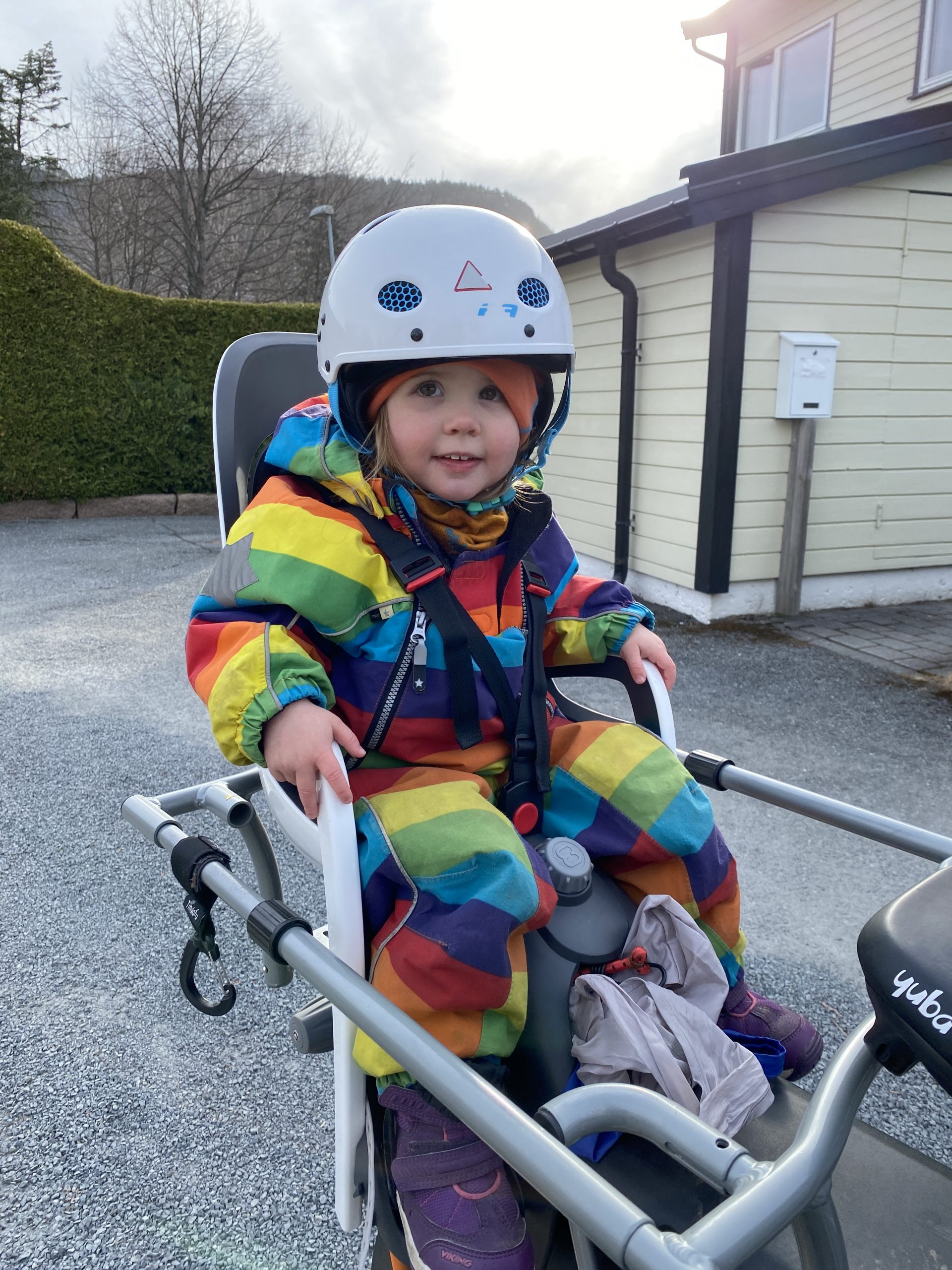